Our goal is to not have a single piece of inaccurate information on this website. If you feel that any of our content is inaccurate, out-of-date, or otherwise questionable, please leave a comment or contact us at [email protected]hacked.com. 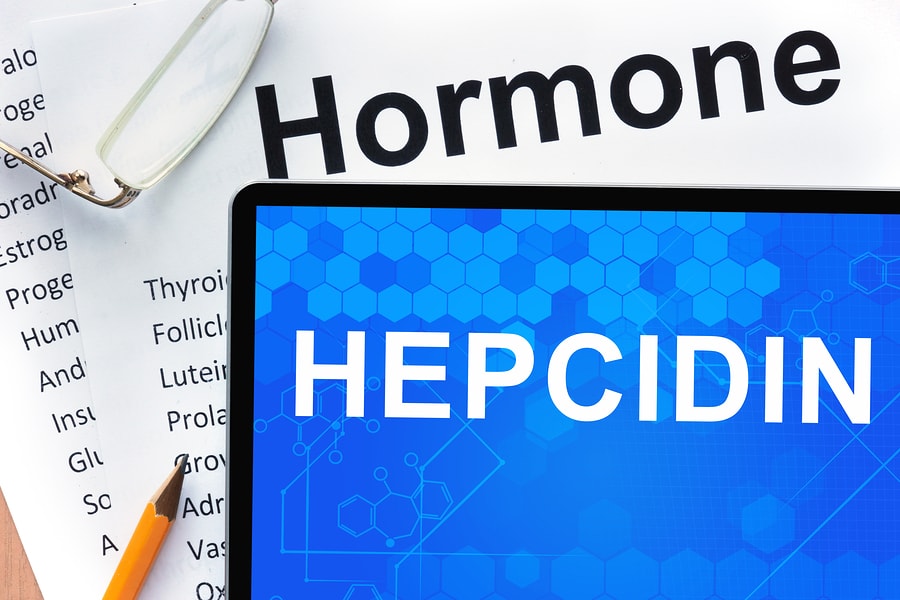 Hepcidin is a peptide hormone that manages the body’s blood iron levels. Although it is antimicrobial and can help protect against Parkinson’s and Alzheimer’s, excess hepcidin can cause many disorders. Read more to learn about its function and role in iron-related disorders.

Hepcidin is a peptide hormone. Its main function is to control the body’s iron levels and help maintain its balance (homeostasis). Iron is an essential micronutrient necessary for the proper functioning of the body. However, when its levels are too high, it becomes toxic [1].

Hepcidin blocks iron that comes from the gut, immune cells (macrophages), and liver cells. It inhibits iron entry into the blood by binding to ferroportin (an iron transporter) and breaking it down [2, 3].

Hepcidin is produced in the liver. The following factors control hepcidin levels:

There are many ways to measure hepcidin levels, so normal reference ranges vary a lot. The four main types of measurements are [8]:

Hepcidin levels are lower in the morning and increase in the afternoon [4].

Scientists initially identified hepcidin as an antimicrobial peptide. That is actually how it got its name: hepatic (liver) bactericidal (microbe-killing) protein – or hepcidin for short [4].

During infection, hepcidin causes depletion of extracellular iron, which is thought to be a general defense mechanism against many infections by withholding iron from invading pathogens [10].

In mice, hepcidin was associated with bacterial removal and reduced inflammation [11].

Hepcidin protects the kidneys from bacterial infections. Hepcidin-deficient mice had much higher bacterial levels in their kidneys in one study. In addition, hepcidin administration to healthy mice significantly lowered Escherichia coli (E. coli) bacterial activity in their kidneys [12].

2) May Protect Against Parkinson’s and Alzheimer’s Disease

Excess iron levels can contribute to Parkinson’s and Alzheimer’s disease. In rats with excess iron levels in their brain, hepcidin (when artificially increased) significantly reduced brain iron levels and prevented iron transport into the brain [15].

In rats, hepcidin added to rat feed caused an increase in blood sugar in all female rats, and intestinal inflammation in some of them [16].

Although the use of hepcidin in normal doses is safe, excessive doses damaged the intestines in rats [16].

Obese adults have a higher risk of low iron levels. Obesity triggers the production of several inflammatory markers, one of them being IL-6. This cytokine increases hepcidin levels, which in turn decreases iron levels [17].

Multiple human studies have shown an association between obesity and high hepcidin levels in both overweight adults and children [18, 19, 20].

Although hepcidin levels are significantly decreased in regular iron deficiency anemia (low red blood cell levels), they can actually be high in other types of anemia [4].

Iron-refractory iron deficiency anemia is a genetic disorder in which the red blood cells are smaller and lighter than normal. It is characterized by increased hepcidin production due to a gene (MT2) mutation [4, 21].

The following cancers have been associated with higher hepcidin levels [23]:

In a study of 85 breast cancer patients, hepcidin levels were associated with those of inflammation markers (IL-6 and Hb). High hepcidin was a risk factor for breast cancer and its spread (metastasis) to the bone [24].

In a clinical study examining the iron levels for 1,819 patients, an increased hepcidin/ferritin ratio was associated with a higher incidence of plaque buildup in arteries [25].

A human study examined the relationship between hepcidin and the risk of dying from cardiovascular events in 405 hemodialysis patients. High hepcidin levels were associated with an increased incidence of both fatal and non-fatal heart events through inflammation [28].

In a study, 46 people with psoriasis (a condition in which skin cells build up and form itchy, dry patches) had higher levels of hepcidin when compared to 32 healthy volunteers [29].

While they also had lower iron levels, there was no significant difference in their ferritin levels. Chronic inflammation during psoriasis increased IL-6, which in turn increased hepcidin production [29].

Low hepcidin levels cause high levels of iron in the body, which leads to cell toxicity. High iron in the cells causes reactive oxygen species formation and oxidative stress. This can lead to dysfunction of the heart, liver, and hormone glands [30, 4].

Thus, no health benefits have been reported [31].

Mutations in the proteins involved in iron sensing and transmission can cause inadequate hepcidin levels, leading to excess iron in the body (iron overload) [4].

This is the most common type of anemia. In pure iron deficiency anemia, hepcidin levels are significantly decreased and can even be undetectable [4].

Even in the absence of anemia, hepcidin appears to be a sensitive indicator of iron deficiency. Compared to hematocrit or hemoglobin, a decrease in hepcidin is an early marker of iron deficiency together with transferrin saturation and decreased ferritin [4].

Hepcidin hemochromatosis is a disorder where there is excessive iron in the body. This can lead to cell toxicity by causing iron buildup in the liver, heart, and joints, among other tissues [1].

Hereditary hemochromatosis is a group of genetic disorders in which hepcidin levels are low due to gene mutations in the genes encoding either hepcidin or its regulators. The severity of iron overload (excess iron) depends on the deficiency [30, 33].

Hereditary hemochromatosis is most frequently due to a certain point mutation (C282Y) in the HFE gene, but can also derive from mutations in TfR2 [21].

Type 2 diabetes patients usually have excess iron levels (iron overload). Hepcidin can be directly decreased by insulin, and the suppressed liver hepcidin production may be a cause of excess iron in type 2 diabetes [34].

In diabetic rats, there was a significant decrease in liver hepcidin level and an increase in intestinal iron absorption and liver iron content [34].

Diseases Linked to Both High and Low Hepcidin Levels

The following conditions are associated with both abnormally low and high hepcidin levels, but this symptom alone is insufficient for a diagnosis. Work with your doctor to determine what underlying condition is altering your hepcidin levels and to develop a plan to properly treat it.

Anemia is one of the most common non-gut-related symptoms of inflammatory bowel disease (IBD). This type of anemia combines features of iron deficiency anemia and anemia of chronic diseases, which may explain why hepcidin levels are low in some and high in other cases [36].

In an observational study, hepcidin levels were lower in 61 IBD patients than in 25 healthy volunteers, whether they had anemia or not [37].

In a study of 15 children with IBD, hepcidin levels were significantly higher when compared to healthy children [37].

Factors that May Increase Hepcidin Levels

The most important thing is to work with your doctor to determine what underlying condition is causing your low hepcidin levels and establish a treatment plan. The additional strategies below are other measures that you may try as an add-on to your treatment regime if you and your doctor determine that they could be appropriate.

In a small clinical trial on 12 healthy people, both 60-min and 120-min runs increased hepcidin levels 3 hours after exercise. This may be due to the increase in IL-6 levels immediately after exercise [38].

Factors that May Decrease Hepcidin Levels

Again, the most important thing is to work with your doctor to determine what underlying condition is causing your high hepcidin levels and properly treat it. The following complementary strategies may also work as an add-on to your treatment regime if your doctor determines that they could be helpful in your case.

15 obese children that partook in a 6-month weight loss program had a significant decrease in their BMI and hepcidin levels [42].

In 20 previously-obese people who underwent weight loss surgery, their hepcidin levels were significantly decreased 6 months after the procedure [43].

In a 120-day study (crossover) of 16 athletes, long-term exercise caused a steady decrease in hepcidin levels [44].

The following drugs may also help lower hepcidin levels based on the existing evidence. While they may help if you are already taking them for their approved uses, you shouldn’t take them to lower your hepcidin levels without discussing it with your doctor beforehand.

In a clinical trial on 109 men, 20 weeks of testosterone administration suppressed hepcidin levels. However, inflammatory markers and iron levels did not change [48].

Estrogen may inhibit hepcidin so the body can have higher iron levels to compensate for iron loss during menstruation [50].

Although we highly advise against these habits due to their multiple negative health effects, both drinking alcohol and smoking cigarettes seem to lower hepcidin levels based on the existing evidence.

Patients with alcoholic kidney disease had suppressed hepcidin production, suggesting that alcohol consumption may cause a decrease in hepcidin [51].

In a study of 40 non-smokers and 41 smokers, smokers had significantly lower blood hepcidin and iron levels [54].

Hepcidin is a protein encoded by the HAMP gene in humans [55].

The G variant of a SNP in this gene, rs10421768, is associated with lower hepcidin levels and increased susceptibility to extrapulmonary tuberculosis [56].

Bone morphogenetic proteins (BMPs) are a group of growth factors that induce bone growth and use iron sensing mechanisms to adjust hepcidin production. BMP6 is the primary regulator of hepcidin [4].

A polymorphism at HFE (rs1800562, C282Y variant) can cause lower hepcidin levels and increased iron buildup in the liver [57].

Transferrin receptor 2 (TFR2) regulates hepcidin, but the mechanism is still unknown. In mice, disruption of TFR2 may cause decreased hepcidin are: production [21].

Hemojuvelin (from liver cells, bone, and heart muscle) acts as a coreceptor for BMP6 to cause hepcidin production [21].

5 Steps that May Regenerate the Liver Naturally