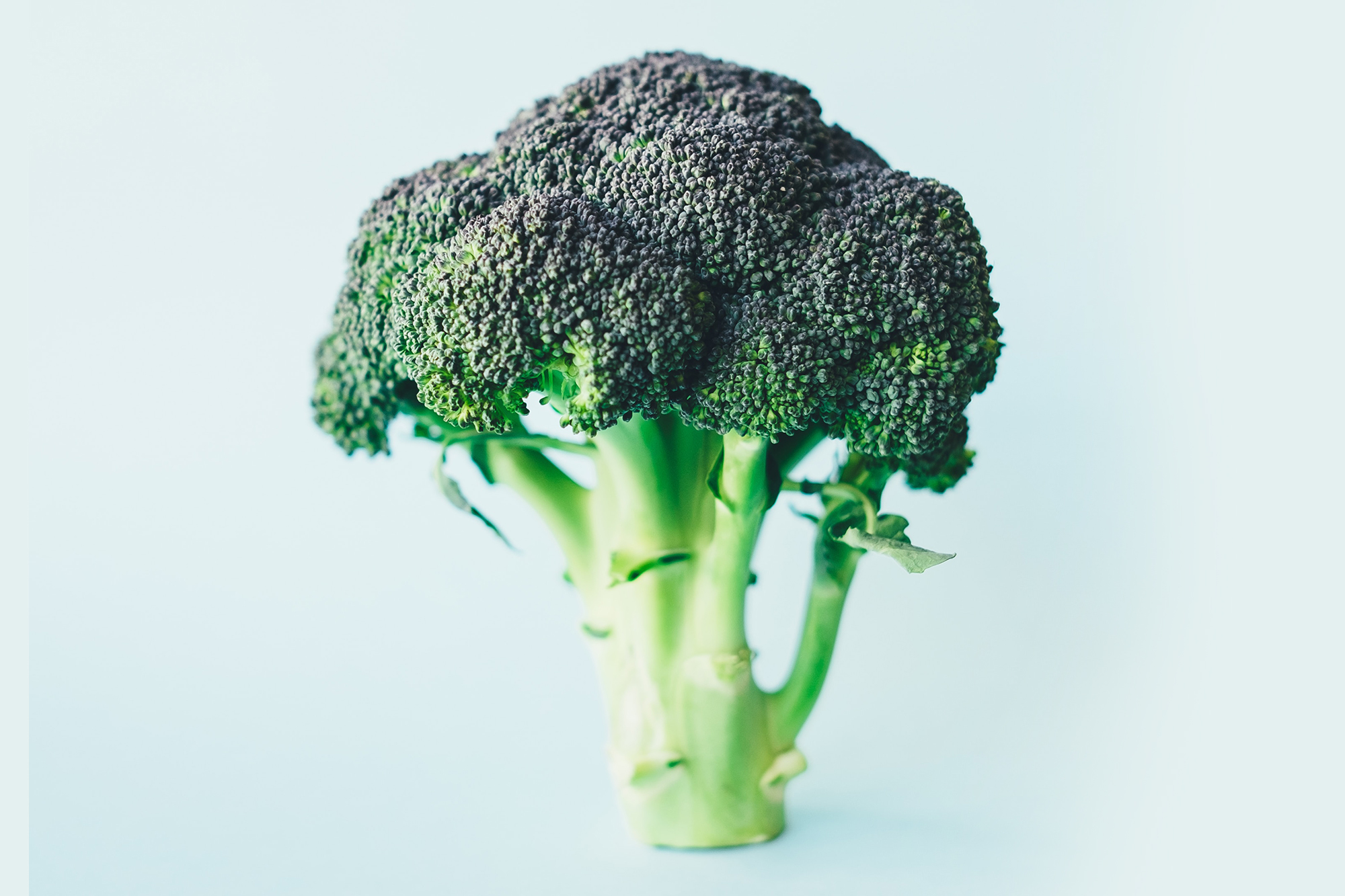 Why should you eat your greens? Sulforaphane, an active compound in broccoli and other Brassica vegetables, may help prevent prostate cancer from recurring. Read on to learn about this beneficial compound and where to get it in your diet.

What are Sulforaphane and Broccoli Sprouts?

Sulforaphane (SFN) is an isothiocyanate, a sulfur-containing organic compound [1, 2].

It is found in cruciferous vegetables such as broccoli, cabbage, cauliflower, Brussels sprouts, and kale [1, 2].

Sulforaphane is produced when glucoraphanin comes into contact with the enzyme myrosinase, contained within the same cells but in different compartments [1, 3].

Levels of glucoraphanin and sulforaphane are highest in broccoli sprouts [4].

To learn about the many potential benefits of sulforaphane and sulforaphane-rich vegetables, check out this post.

Sulforaphane is a sulfur-containing compound which forms when glucoraphanin contacts an enzyme called myrosinase. It is most abundant in broccoli sprouts and other cruciferous vegetables.

Sulforaphane (in the form of broccoli sprout extract) boasts some relatively strong clinical evidence for a role in the prevention of prostate cancer and management strategies for preventing recurrence of prostate cancer.

That being said, the FDA has not approved sulforaphane for the prevention of prostate cancer recurrence. Talk to your doctor before supplementing.

Research in Other Cancers

While studies have advanced the furthest for sulforaphane in prostate cancer, it is also under investigation for possible action against other types of cancer. Sulforaphane is considered a promising compound for a few reasons; not least of these is that people who eat sulforaphane-rich Brassica vegetables are significantly less likely to develop cancer [8, 9].

Three to five servings of Brassicas per week are associated with a 30% to 40% decline in the incidence of cancer compared to people who don’t eat these vegetables [8].

Subjects who consumed at least one portion of cruciferous vegetables per week were less likely to develop oral cavity, pharynx, esophageal, colorectal, breast, and kidney cancers [8].

Researchers are also investigating the potential of sulforaphane against glioblastoma, thyroid, prostate, mammary, tongue, and lung cancer in animals [10, 11, 12, 8, 13, 14].

Apart from being effective in its own right, sulforaphane may also enhance the efficacy of anti-cancer drugs including cisplatin, gemcitabine, doxorubicin, and 5-fluorouracil, toward pancreatic and prostate cancer cells, while limiting their toxicity to normal cells [8].

However, although sulforaphane was found to be safe and effective in several studies, it was not effective in two clinical trials [7, 17].

Additional studies are still required before sulforaphane could be incorporated into conventional cancer therapies. Talk to your doctor before attempting to use sulforaphane and sulforaphane-rich foods for any medical purpose, let alone cancer prevention or treatment.

Sulforaphane is being investigated for its potential to prevent recurrent prostate cancer and in several other clinical settings.

Sulforaphane is considered safe when consumed in the amounts available in broccoli and other greens, and very few side effects have been observed in clinical trials of broccoli sprouts, their extracts, or purified sulforaphane. However, supplements are not standardized, and we do not have sufficient data to determine the safety of long-term sulforaphane use. Talk to your doctor to avoid adverse effects or unexpected interactions.

Sulforaphane appears to increase the activation of many beneficial genes, including tumor suppressor genes. However, sulforaphane may also activate long terminal repeats (LTRs), DNA sequences found within our genome that impair genome stability and cause mutations [18].

Consumption of broccoli sprouts by human volunteers caused a 10-fold increase in LTR activation in white blood cells. These effects are transient, and it remains to be determined whether they are biologically meaningful [18].

Genotoxic effects were observed in unpublished studies with pigs fed with 600 g of raw broccoli for 12 days. These pigs had an increase in DNA strand breaks by 21% in the colon [20].

Also, after feeding raw or steamed broccoli to mice and rats, an increase in DNA adducts (cancer-causing chemicals binding to DNA) was observed [20].

However, all these effects in animals were observed for mature broccoli plant consumption. An additional benefit of broccoli sprouts is that they contain negligible quantities of indole glucosinolates, which predominate in the mature vegetable, and may give rise to degradation products (e.g., indole-3-carbinol). This may enhance tumorigenesis [21].

There is a single case report of liver toxicity after drinking large amounts of broccoli juice for 4 weeks (800 ml/day). Transaminases, aspartate aminotransferase, and c-glutamyltrans-peptidase were elevated but decreased to normal within 15 days [20].

This was also caused by consuming the mature plant; the contribution of sulforaphane is unknown. Until we know more, caution is advised.

The amount of sulforaphane (glucoraphanin) can vary widely in vegetables [3].

Broccoli is not the only cruciferous vegetable which has SFN, but it yields the highest amounts, with glucoraphanin content around 75% of total glucosinolates [3].

Furthermore, 3-day-old broccoli sprouts contain 10 to 100 times higher levels of glucoraphanin than does a mature broccoli [22, 23].

Cruciferous vegetables are the best dietary sources of sulforaphane, and among these, broccoli sprouts are the richest.

GSTs are a large family of glutathione conjugating enzymes, which attach glutathione to the substance that needs to be detoxified out of the body. Three of them, GSTM1, GSTP1, and GSTT1 have been implicated in the metabolism of isothiocyanates, and sulforaphane in particular [26].

SNPs in the GSTM1 gene

Null mutations in GSTM1 result in the absence of a functional enzyme. The frequency of the GSTM1-null variant is estimated to be between 27 and 53% in human populations [26].

Individuals with GSTM1-null mutations may benefit more from SFN due to the decreased degradation of SFN, which therefore increases exposure [26].

However, several other studies suggest otherwise. In these studies, GSTM1-positive individuals benefited more from either broccoli or cruciferous vegetable consumption compared to GSTM1-null individuals. GSTM1-null carriers excrete more SFN and SFN-metabolites, and excretion is faster [26].

Certain mutations in the GSTM1 gene may reduce the capacity to detoxify pollutants and other toxins. GSTM1 variants may alter sulforaphane metabolism.

SNPs in the GSTT1 gene

Null mutations in the GSTT1 gene result in the absence of a functional enzyme. The frequency of the GSTT1-null variation has been estimated to be between 10 and 21% for Caucasian populations and as high as 64% for Asian populations [26].

Broccoli sprouts are more effective in detoxification when GSTT1-positive carriers are exposed to airborne pollution compared to the null carriers [27].

SNPs in the GSTP1 gene

As an Indirect Antioxidant:

Sulforaphane is an organic compound abundant in cruciferous vegetables like kale, cabbage, and broccoli. The richest dietary source of sulforaphane is broccoli sprouts.

Sulforaphane is being investigated for its potential to prevent recurrent prostate cancer and in several other clinical oncological settings. While there is nowhere near enough evidence to recommend this compound in the prevention or treatment of cancer, this research does support the importance of a healthy, vegetable-rich diet for long-term health.

Some animal research suggests that sulforaphane has the potential to disrupt DNA or to be toxic to the liver. Some people may have genetic variants that alter the way their body processes and metabolizes it.