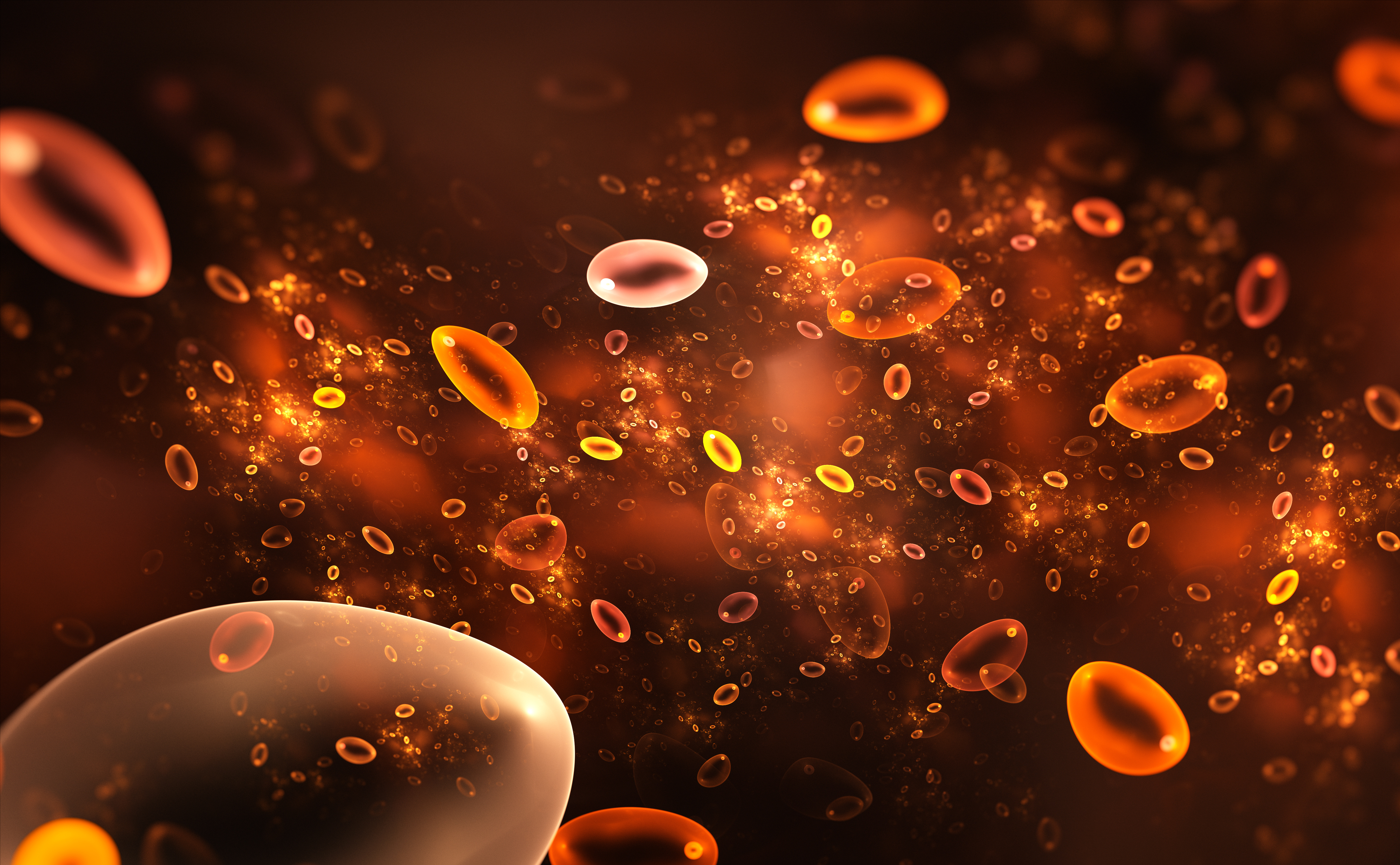 Scientists suspect that TGF-beta may play a role in autoimmune diseases, food intolerance, cognitive function, wound healing, and more. Learn about its function and factors that might increase or decrease its activity.

TGF-b is a cytokine that seems to affect the growth, proliferation, and repair of many cell types. It’s essential for survival. But science suggests that it can have both pro- and anti-inflammatory effects [1].

TGF-beta is produced in cells such as platelets, macrophages, B- and T-lymphocytes, fibroblasts, ECs, osteoblasts, and osteoclasts. In the brain, it’s made in astrocytes and microglial cells. The thymus, bone marrow and bone also produce TGF [2, 3].

There are different types of TGF, but research holds that TGF-b1 is the main type involved in immunity and tissue repair [3].

Recent analyses show that blood TGF is highly correlated with platelet count, probably because most of the TGF is released by platelets [4]. Some websites claim that TGF-beta is often elevated in people with “biotoxin/mold issues.” However, no proper scientific data backs them up.

Additionally, most doctors do not accept that there is any causal connection between mold exposure and any health issue [5].

Scientists think that TGF-beta may have the following activities, mostly based on animal and cell culture data:

Proper human studies have not confirmed many of these activities.

Although we’ve structured this article around potential positives/negatives and activators/inhibitors, the details of how TGF-beta works and how it can impact health are still largely unknown.

Additionally, many of TGF-beta’s effects likely depend on its levels. Detrimental effects have mainly been linked with abnormal TGF-beta values.

More importantly, the majority of the scientific findings described in this article are from animal or cellular studies. These can’t be directly extrapolated to humans. We know little about factors that affect TGF-beta in humans.

Therefore, the studies listed below should not be interpreted as indicative of any health effects in people.

When we talk about TGF-beta-associated effects and disorders, it’s important to know that these disorders are not necessarily due to abnormal TGF-beta levels or production as such. They can stem from specific cell types (such as intestinal TGF-beta), underlying health problems, or the activity of other downstream processes.

Additionally, the majority of human studies covered in this article deal with associations only, which means that a cause-and-effect relationship hasn’t been established.

With this in mind, the “potentially beneficial” section goes over the activities of TGF-beta that are seen as protective. “Potentially detrimental” describes studies that found a link between abnormal TGF-beta activity and certain health problems or biochemical imbalances.

Scientists think that TGF might be protective against autoimmune gut disorders. They suggest that TGF increases serotonin transporters and serotonin uptake in the gut, which may be low in IBS and IBD [7].

Ongoing studies are looking to see if TGF-b in the gut area can help create oral tolerance in people with food allergies [8].

The proposed mechanisms of oral tolerance are the active suppression of immune responses through the induction of regulatory T cells in the gut-associated lymphoid tissue. These Th3 cells secrete TGF-b, IL-4, and IL-10, which decrease Th1 and other immune cells. However, these mechanisms haven’t been confirmed in humans [8].

Additionally, TGF-b is hypothesized to lead to the death of T cells that attack tissue (clonal deletion) [9].

As a growth factor, TGF-b promotes wound healing. It’s thought to have a unique effect on the extracellular matrix by stimulating the synthesis of matrix proteins and decreased matrix degradation [10].

However, scientists believe that, in excess, TGF-beta may lead to wound “over-healing,” which causes scarring and keloids. Research has yet to discover ways to balance its response to achieve optimal healing [10].

According to one hypothesis, TGF-b suppresses the immune system at the systemic level but stimulates the immune and inflammatory responses at the local level. Human studies have yet to verify this.

Research suggests that TGF-b1 deficient mice develop an inflammatory response with massive white blood cell infiltration in numerous organs, accompanied by increased expression of TNF-a, IFN-g, and class I and II MHC antigens. This results in death at 3 to 5 weeks. These mice also have high levels of autoantibodies [11].

These pathways haven’t been explored in humans.

Recent research suggests that TGF-b may support cognitive function. One small human study found that TGF-beta was associated with increased cortical thickness, which was thought to be due to the reduction of cytokines. However, this study focused on associations only [16].

In a study that followed a similar design and included 40 depressed patients, TGF-beta was proposed to play a role in protecting against depression. This link hasn’t yet been replicated and larger studies are needed [17].

Scientists believe that TGF-b may increase inflammation locally, but more human data are required before we can come to solid conclusions. In an inflammatory environment, it’s hypothesized to produce proinflammatory Th17 and Th9 cells (instead of Tregs) and inhibit Th2 cells [18].

Other research teams are investigating whether TGF-b:

These proposed mechanisms rely on animal and cellular data. They haven’t been researched in humans.

One theory states that TGF-b may cause various cells to stick to the site of inflammation and tissue injury (chemotaxis). These include neutrophils, monocytes, lymphocytes, mast cells, and fibroblasts [26].

TGF-beta is also thought to activate these cells to produce inflammatory cytokines (IL-1, TNF, and IL-6) and cause white blood cells to stick to the vessel wall and Extracellular matrix [26].

TGF-beta has mostly been researched in cancer cells. Its impact on cancer in humans is unknown.
Remember that many substances and their related pathways have anti-cancer effects in cells. This doesn’t mean that they have any medical value. On the contrary, most pathways that are researched in cancer cells are not suitable targets for further animal studies or clinical trials due to a lack of safety or efficacy.

That said, scientists think TGF-β might be an inhibitor of cell proliferation and tumor suppressor at the beginning of tumor formation. However, once the cells become resistant to TGF-β, it seems to mainly support tumor growth and metastasis by promoting immune evasion and angiogenesis [18].

Researchers are studying if TGF-b increases VEGF, by increasing the hypoxia-inducible factor, which may make tumors spread [27, 28].

In one human study, an elevated blood level of TGF-b was correlated with lymph node metastasis and poor prognosis in patients with gastric cancer. This finding hasn’t been replicated. Larger, rigorous human studies are needed to determine if TGF-beta levels are a relevant marker in people with cancer [29].

Animal data and cellular studies are investigating whether TGF-beta:

TGF-b is hypothesized to have both positive and negative effects on bone mineral density. Scientists consider that in the short term it can help bone density, but chronically elevated TGF-b may decrease bone density [34].

No valid clinical evidence supports the approaches listed below to modify TGF-beta activity.

Have in mind that we still don’t quite know when – and to what extent – TGF-beta could be bad. It’s been linked with some health issues in excess, but it’s not necessarily the cause. This cytokine is also thought to be essential for life. Thus, blocking it too much seems to be detrimental.

The best way to support your gut health and immune defense is to live a healthy lifestyle and address underlying health problems by seeing a doctor.

If you believe that you are already ticking all of those boxes and you still struggle with immunity or other health problems, talk to your healthcare provider about any complementary strategies that could be right for you.

You may try the approaches listed below if you and your doctor determine that they could be appropriate. Do not make any major changes to your lifestyle or supplements regimen before speaking to a doctor.

Lastly, remember that none of the approaches listed below should ever be used to replace whatever your doctor has recommended or prescribed.

Based on research in animals and cells, scientists think these may inhibit TGF in different places (but not necessarily systemically):

The effect of these substances or pathways on TGF-beta in humans is unknown.

TGF-beta “increasers” are usually viewed as potentially harmful, though normal TGF-beta activity is not. Theoretically, the substances or pathways below may over-activate TGF-beta. Many of them should be avoided since they are unhealthy in general, such as cigarette smoke and psychological stress.

Researchers are investigating whether the following may act to increase TGF-beta in animals and cells:

On the other hand, scientists think that the following substances may increase TGF-beta and improve immunity in animals or cells:

Their effects on TGF-beta pathways in humans remain unknown.

Factors that May Raise Intestinal TGF-beta

A separate line of research is focusing on intestinal TGF-beta, which has been implicated in gut protection.
Animal and cellular research are looking to determine the effects of:

The effects of these substances or pathways on TGF-beta in humans remains unexplored.

You can find the TGFbeta1 gene on SelfDecode with 7 SNPs.

SelfDecode is a sister company of SelfHacked. The proceeds from your purchase of this product are reinvested into our research and development, in order to serve you better. Thank you for your support.