Our goal is to not have a single piece of inaccurate information on this website. If you feel that any of our content is inaccurate, out-of-date, or otherwise questionable, please leave a comment or contact us at support[email protected] 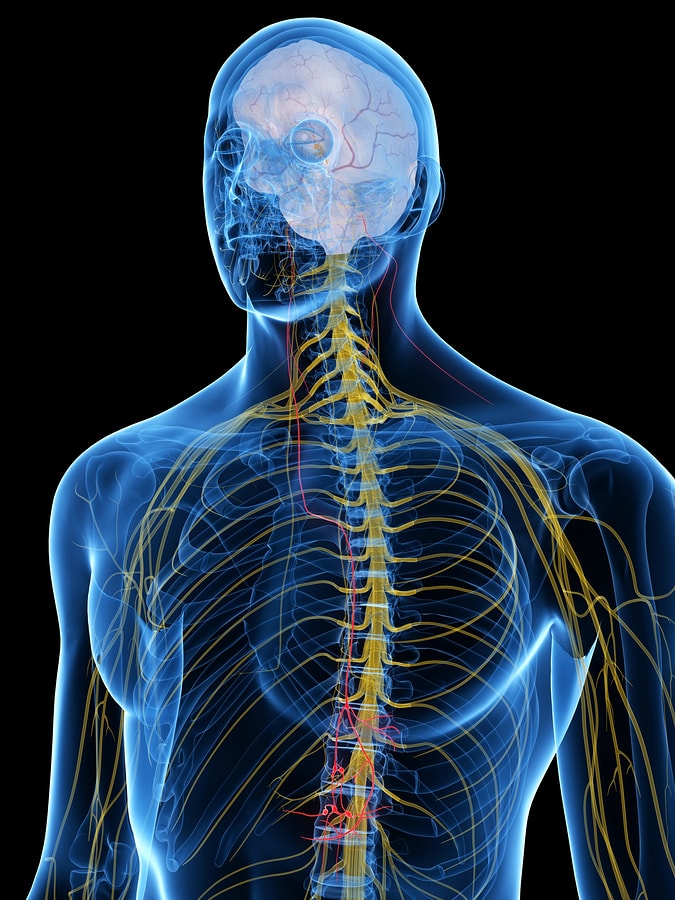 This post focuses on the science behind various neurotransmitters and hormones and their link to vagus nerve activity.

Most of the research has been conducted in animals or cells. We still know little about the interplay between the vagus nerve, hormones, and neurotransmitters in humans.

Our aim is to discuss research findings. We strictly advise against taking any hormones to affect vagus nerve activity.

On the other hand, 5-HT7 receptors may reduce vagus activation [5, 6].

Thus, serotonin has some mixed effects. 5-HTP is a supplement that may increase serotonin, but it’s unknown whether it affects the vagus nerve.

Oxytocin may increase vagal nerve activity from the brain to the gut (in the brain and orally ingested), which induces relaxation and decreases appetite [7].

Mice who had their vagus taken out didn’t exhibit the appetite-reducing effects of oxytocin [7].

Orexin neurons are found in centers which control vagus nerve activation from the brain [9].

Orexin stimulates the vagus nerve from the brain, which promotes gut flow. It can stimulate the pancreas, too, according to an animal study [10].

Orexin is implicated in increasing glucose tolerance or insulin sensitivity via the liver vagus nerve [11].

On the other hand, orexin might inhibit the activation of the vagus nerve signals to the brain by competing with CCK [12].

Orexin might stimulate the vagus nerve in the brain, liver, and pancreas, but human data are needed.

Ghrelin is hypothesized to increase growth hormone and hunger by stimulating the vagus nerve signal from the brain to the gut, and this is abolished by capsaicin (in chili) in animals [13].

Ghrelin may stimulate the pancreas from the brain via the vagus [14].

Vagal impulses to the brain appear to be also activated by leptin. Leptin potentiates the CCK-induced activation of the vagus nerve [15].

Leptin-resistant animals were hungrier since the vagus nerve became less sensitive to CCK [16].

However, another study found that leptin effect on the vagus signal doesn’t play a major role in food intake [17].

More research is needed to clarify these findings.

Leptin might cause satiety by activating the vagus nerve, but its effects seems to be mixed. Further studies are required.

CRH has variable effects on the vagus nerve. Scientists think it decreases its activity from the brain to the heart. Vagus nerve activation will slow the heart rate, but CRH seems to inhibit this and increases heart rate–at least in animals [18].

Researchers are investigating whether CRH stimulates the vagus impulse from the brain to the colon (by activating the dorsal nucleus of vagi, via cholinergic transmission) [19].

Some scientists believe that the vagus nerve may help reduce pain, and this is the proposed mechanism by which estradiol reduces pain in certain circumstances. However, these pathways have not been properly verified in humans [21].

Besides influencing the release of oxytocin, the vagus nerve is thought to be important for releasing testosterone. Research teams are investigating whether vagus nerve imbalances are connected to low testosterone in some men [22].

One intriguing study hypothesized that although testosterone can make people more aggressive, this is not the case when the vagus nerve is functioning right. These findings have yet to be replicated [23].

Proper functioning of the vagus nerve is important for the production of GHRH (growth hormone-releasing hormone) and IGF-1 in animals [24].

The vagus nerve may stimulate other hormones such as parathyroid hormone, which is important for the conversion of vitamin D3 to active vitamin D (1,25). A direct influence of the vagus nerve on vitamin D status hasn’t been established, though [25].

Stimulation of the vagus nerve may also produce the release of vasoactive intestinal peptide (VIP [26].

NPY might block some of the vagus nerve effects, according to animal data. NPY is described as an anti-anxiety and hunger-increasing hormone, which prevents heart rate decrease from vagal stimulation. How it impacts vagus nerve stimulation in humans is unknown [27].

The vagus nerve affects many hormones, some of which are implicated in lowering pain and anxiety. These pathways are still being explored in humans.

What Causes Leptin Resistance & Can You Reverse It?

Are You Th1 or Th2 Dominant? Effects + Immune Response