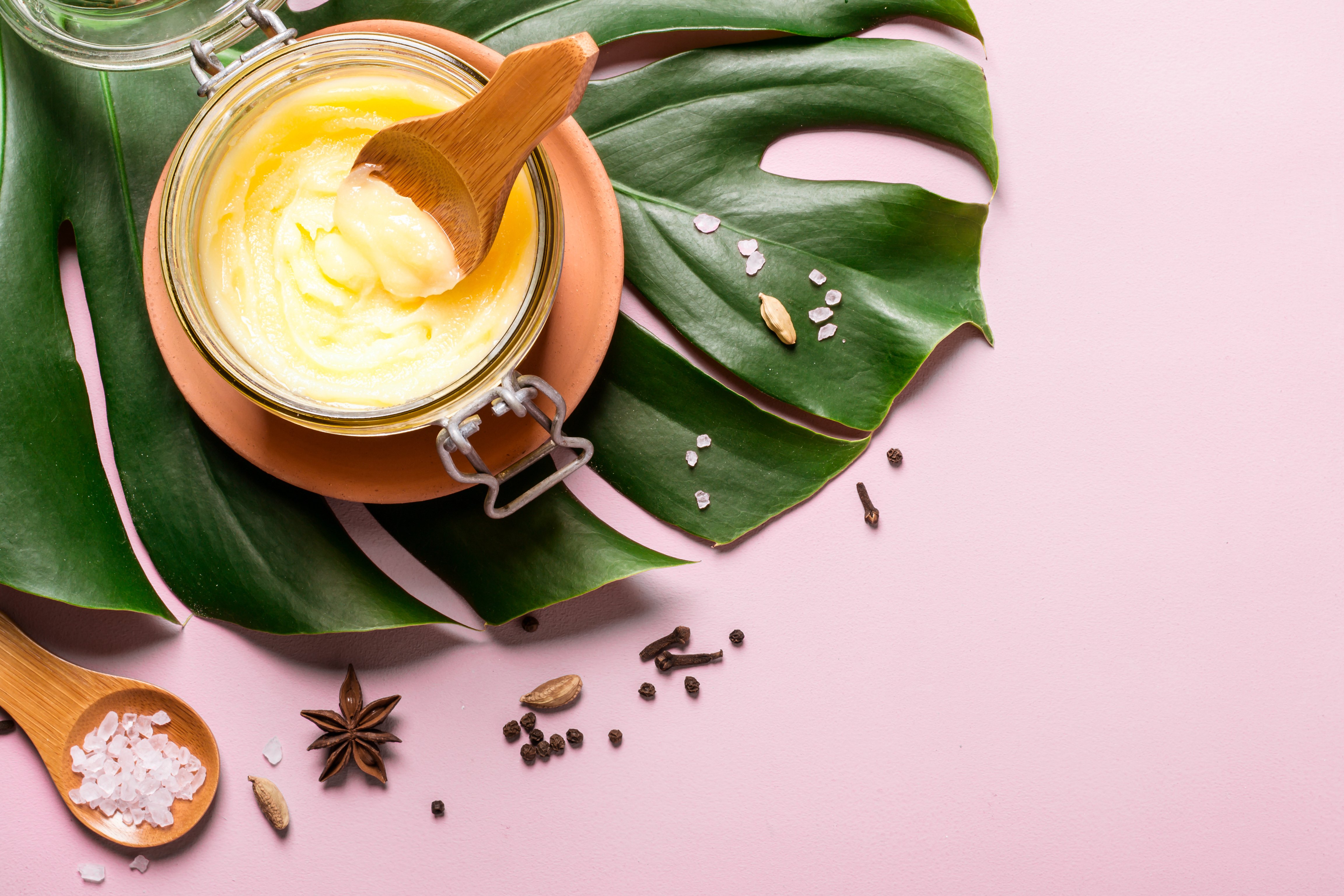 Ghee is a form of clarified butter (butter with impurities removed) that has been used for thousands of years. Traditionally used for cooking, ghee has unique potential health benefits when consumed in moderation, such as protecting the heart. Still, the clinical research is scarce and inconclusive. Read on to learn the potential health benefits of ghee, nutrition facts & recipes.

What Is Ghee (Butter)?

Ghee, also known as ghrita (Ayurvedic), clarified butter, or butter oil, is pure milk fat. It is prepared by heating milk or cream to remove the water via evaporation, followed by filtering out milk solids. Ghee is considered to be the healthiest fat in some cultures (Ayurveda). It is very low in the milk proteins (casein and whey) normally found in dairy products [1, 2].

As a source of dietary fat, ghee has been used for preparing various dishes, especially in India. Numerous health benefits are attributed to ghee, such as antioxidant effects, cholesterol-lowering, and more [3, 1, 4].

Ghee has negligible levels of lactose, a milk sugar that affects lactose-intolerant individuals. It is also low in galactose (another milk sugar) as well as the milk proteins, casein, and whey. All of this makes ghee suitable to use in a dairy-free diet [5, 3, 1, 4].

Although ghee is considered dairy-free, it is not vegan because it is derived from animal products (milk or cream) [3, 1, 4].

Ghee is composed of 99-99.5% fat – saturated fats, cholesterol, omega-3 fatty acids, and unsaturated fats. The omega-3 fatty acids in ghee are primarily linoleic acid and docosahexaenoic acid (DHA). The composition and quality of ghee varies depending on the source of milk (cow, goat, sheep, or buffalo) and how the ghee was produced (see the section: Traditional Versus Industrial Preparation). The remaining 1% is water, traces of milk proteins (casein and whey), carotene/carotenoids (antioxidants), and vitamins (vitamin A, D, K, and E) [6, 7, 8].

How Does It Work

Linoleic acid has anti-oxidative, anti-inflammatory, and anti-allergy properties. It increases the activity of enzymes (catalase and superoxide dismutase) that prevent oxidative damage in cells. Additionally, it reduces the amount of fat tissue in the liver and muscles by increasing the activity of another enzyme involved in fat breakdown (carnitine palmitoyltransferase I) [10].

Docosahexaenoic acid (DHA) is a major component of the brain and eye tissues (outer layer of cells) that helps in cell signaling. For example, in the retinal cells of the eye, DHA facilitates a reaction of a protein (rhodopsin) involved in signaling to the brain [11, 6].

1) May Protect the Heart

In a preliminary study, patients with psoriasis received 60 ml/day of ghee for 7 days, which decreased blood cholesterol and fat (triglycerides and phospholipids) levels [7].

A mixture containing ghee (MAK-4 and MAK-5) reduced LDL cholesterol oxidation, which causes atherosclerosis, in 10 patients with elevated fat levels in the blood (hyperlipidemia). The treatment involved 10 g of MAK-4 (paste) and 500 mg of MAK-5 (tablet) twice a day for 18 weeks [15, 7, 16].

Historically, ghee and honey combinations have been used to treat infected wounds since 600BC. Four hospitals in Mumbai used ghee and honey as dressing for different types of wounds for several years. It was sometimes an effective treatment for wound recovery and pain [17].

In a study with 45 patients, those treated with an herbal ghee mixture (containing R. cordifolia, B. aristata, S. malabarica, W. fruticosa, M. indica, S. racemosa, and E. berberis) had improved wound healing compared to those treated with a disinfectant (povidone-iodine) [18].

No clinical evidence supports the use of ghee butter for any of the conditions listed in this section. Below is a summary of the existing animal and cell-based research, which should guide further investigational efforts. However, the studies listed below should not be interpreted as supportive of any health benefit.

May Protect the Liver

Additionally, ghee-fed rats had increased levels of enzymes (glutamyl transpeptidase and uridine diphospho-glucuronosyltransferase) that detoxify carcinogens and other compounds. This prevented damage to the liver and breast tissues [21].

Linoleic acid (conjugated) from ghee increased the level of antioxidants in the liver and blood of rats, including enzymes like catalase, superoxide dismutase, and glutathione transferase. Additionally, ghee lowered cholesterol and fat (triglyceride) levels in rat livers [20].

In two rat studies, ghee increased the levels of enzymes (gamma-glutamyltranspeptidase, quinone reductase, and uridine diphospho-glucuronosyltransferase) that detoxify chemicals and carcinogens. These enzymes can reduce the risk of developing cancer [21].

Rats fed ghee had a lower incidence of tumor development than rats fed soybean oil. Ghee also lowered the levels of certain enzymes related to cancer cells and thus might have a protective effect against cancer [23, 24].

However, these studies don’t imply actual anticancer effects in humans. In the lack of clinical evidence, ghee can’t be recommended for cancer prevention or treatment.

There is a very limited number of clinical trials focused on ghee. Only one of the human studies was a randomized control trial. A lot more research, especially controlled and randomized clinical trials, needs to be conducted to confirm the findings.

Ghee butter is likely safe in the amounts normally found in foods.

Generally, the consumption and use of ghee in the studies did not have any side effects listed. However, studies in humans were limited in number and design.

The application of ghee heated with cow dung on the umbilical wounds of the newborns is not recommended, as it is a health risk and may cause tetanus [25].

Ghee in a Diet

Due to the lack of research, there are no exact dosage recommendations for ghee. In the largest clinical study presented, psoriasis patients received 60 ml doses of ghee over 7 days. This was effective in this experiment and did not have any associated side effects [14, 7].

The nutrition content between ghee and butter is similar. The total fat content (saturated, unsaturated, and cholesterol) of the two is nearly identical. However, due to a different preparation, ghee has lower levels of milk proteins and sugars (such as casein, whey, and lactose) than butter [7, 26].

Additionally, due to its low moisture content, ghee has a much longer shelf-life than butter [6].

How to Make Ghee

Traditionally prepared ghee contains more phospholipids. Additionally, ghee made through the Ayurvedic method contains a higher amount of docosahexaenoic acid (DHA), an omega-3 fatty acid which is a vital part of eye and brain tissues [6].

Ghee is a nutritious fat that is low in inflammation (if you tolerate it). I am sensitive to many things, but I do well with ghee. While some people who usually react to dairy can tolerate ghee, others (especially people with a dairy allergy) have a negative reaction to ghee.

If you are interested in trying (or already love) ghee, try these delicious low-lectin recipes! Ghee is flavorful, does not have any lectins, and is rated least inflammatory, which is great for those who have a lectin sensitivity. For a list of other foods low in lectins, click here.

Making your own ghee is surprisingly simple:

This Bangladeshi version of a chicken korma is fragrant and flavorful but not overly rich:

For more delicious recipes like these (such as Garlic Ghee Shrimp, Cinnamon Breakfast Porridge, Egg-Free Herbed Flatbread, and many more), please check out our cookbook for a guide to doing an elimination diet and lectin sensitivity!

Ghee as Part of the Lectin Avoidance Diet

Ghee, like all oil (ghee, olive oil, caprylic acid, hemp oil), is low in lectins (to see a list of other foods low in lectins, click here). Some lectins and other substances found in plants can trigger immune reactions and damage the gut in certain people. These substances can be found in whole grains, beans, tomatoes, or fruit. Gluten is another potentially irritating food component [27, 28, 29, 30].

Food sensitivity is a set of inflammatory or adverse reactions to food that isn’t an allergic reaction. While food allergies cause an immediate reaction (such as rashes, hives, pain, swelling, and in extreme cases, asthma/airway closure or anaphylactic shock), food sensitivities are usually not immediate and the inflammatory symptoms can last for a few days. Usually, a food sensitivity will cause symptoms that are obscure and don’t fit neatly into any diagnosis such as “brain fog”, pain, fatigue, anxiety, and insomnia [30].

Although there are food sensitivity tests available, several studies have shown they are not accurate or effective. The gold standard to identify non-allergic food sensitivities is to eliminate the food and bring it back. People with inflammation issues, autoimmune disease (Th1, Th2, Th17 dominance or leaky gut), histamine intolerance, or unexplainable health issues may want to experiment with an elimination diet, such as the Lectin Avoidance Diet, to identify and eliminate potential food irritants.

Shea Butter For the Skin + Other Benefits & Side Effects