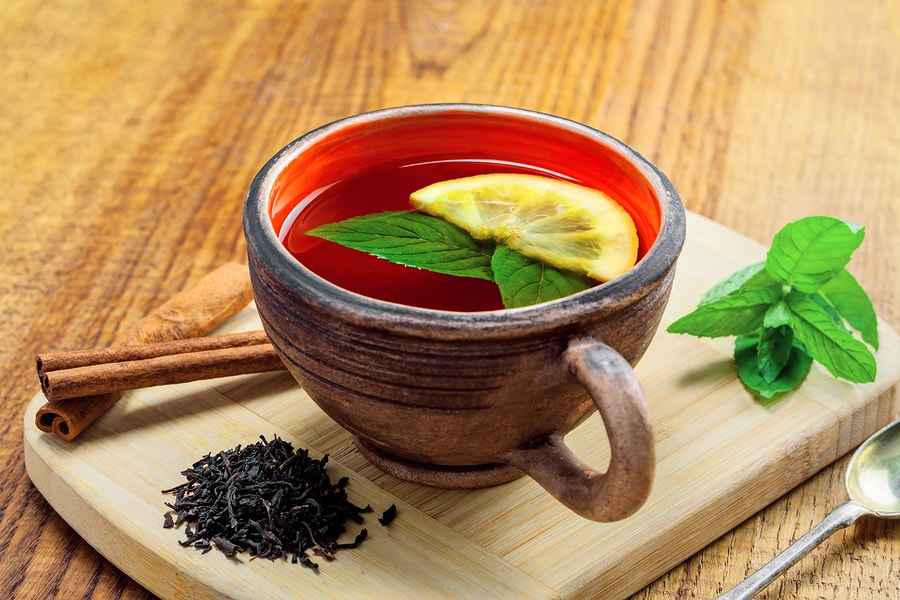 What separates Ceylon tea from other teas is its location of origin, its manufacturing process, and its high levels of antioxidants. Ceylon tea could have a variety of health benefits for the heart, gut, and kidneys. Keep reading to learn more about its health benefits and possible side effects.

What Is Ceylon Tea?

The amount of antioxidants in the tea depends on the process before tea drying, the geographical location, soil, and climate the tea is grown in. The type of plant, growth, season, and degree of maturity also influences its antioxidant components. Because of that, some people claim that Ceylon tea is the best tea in the world [2].

Ceylon black tea leaves are processed (fermented), and it is the most famous tea type. The black tea has more caffeine than other types. Ceylon green tea is made from unfermented tea leaves and has high antioxidant content [2, 3].

White Ceylon tea leaves are dried in the sun and are the least processed. Because of this, white tea has more antioxidants than green and black. Ceylon white tea also contains high levels of GABA, which influences many processes in humans [3].

Ceylon tea is a type of black, green, or white tea grown in the Ceylon region of Sri Lanka. Ceylon black tea is made from the fermented leaves of the tea plant.

Plant polyphenols are the main active compounds in the tea; they act as antioxidants. The major polyphenols in tea are [4]:

Other active compounds include [2, 4]:

Ceylon tea has not been approved by the FDA for medical use and generally lacks solid clinical research backing up any particular health claim. Speak with your doctor before supplementing.

The flavonoids from Ceylon tea are believed to help prevent heart disease [2].

Two meta-analyses showed that black and green tea consumption lowered blood levels of bad (LDL) cholesterol, especially in people with higher heart disease risk. However, it did not have a significant effect on total and good (HDL) cholesterol [5, 6].

In a study of 263 subjects, consuming 9 g (around 3 cups) of black tea for 12 weeks, heart disease risk markers were decreased (blood uric acid and C-reactive protein levels). Black tea can benefit humans who have a high risk of heart disease [7].

Consumption of green or black tea also reduced blood pressure in individuals in a meta-analysis (10 trials and 834 participants) [8].

Tea flavonoids also had protective effects against heart disease in a study of 3,454 subjects [10].

Drinking tea has been associated with reduced rates of heart disease in clinical studies of hundreds of participants.

A meta-analysis of 17 studies showed that tea consumption may reduce the incidence of osteoporosis [11].

In a survey of 1,937 adults, drinking tea for more than 10 years had a beneficial effect on bone strength and bone mineral density [12].

The following purported benefits are only supported by limited, low-quality clinical studies. There is insufficient evidence to support the use of ceylon tea for any of the below-listed uses. Remember to speak with a doctor before drinking ceylon for health purposes, and never use it in place of something your doctor recommends or prescribes.

Flavonoids from ceylon tea can also help protect the brain and improve its function [2].

In a study of 10 seniors, daily ingestion of low-caffeine green tea helped reduce their stress and improved their quality of sleep [15].

A review also showed that green tea reduced anxiety, boosted cognitive function, and helped with memory and attention. The effect of green tea cannot be attributed to a single compound, but caffeine and L-theanine are the top 2 contributors [16].

EGCG increases iron-export protein ferroportin production, which helps reduce the stress in the brain. It helped prevent nerve cell degeneration in a mouse model of Parkinson’s [17].

Green tea extract ingestion before moderate to intense exercise improved insulin sensitivity and tolerance in a study of 23 men [18].

In a 5-year study of 17,413 middle-aged Japanese subjects, consumption of green tea was associated with reduced incidence of type 2 diabetes [19].

Another 11-year cohort study of 5,823 British participants reported a decrease in diabetes incidence in people who drank both tea and coffee [20].

However, there were no relationships between drinking tea and diabetes in a cohort study of 46,906 African-American women [21].

Because of the mixed or contradictory results in some large studies of Ceylon tea and diabetes, the evidence is still considered insufficient to support any benefit.

Drinking tea has been associated with reduced rates of diabetes and improved insulin sensitivity.

Larger and more robust human trials will be required to determine whether tea has a plausible role in weight loss and weight management.

Green tea polyphenols have a protective role in rats fed a high-fat diet. The polyphenols increased production of mitochondrial sirtuin 3 (SIRT3) (which improves ketogenesis). This contributes to the antioxidative protection in the kidneys [27].

Green tea also helps get rid of toxins, thus exerting a protective effect on the kidneys [28].

However, in a cohort study of 12,428 subjects, there was not a clear relationship between kidney function and tea consumption [30].

Because results have been mixed or contradictory, additional research is required to determine whether tea can benefit kidney health.

No clinical evidence supports the use of ceylon tea for any of the conditions listed in this section. Below is a summary of the existing animal and cell-based research, which should guide further investigational efforts. However, the studies listed below should not be interpreted as supportive of any health benefit.

EGCG and theaflavin digallate (from green and black tea) inhibited the influenza A and influenza B virus in cells [32].

These results are limited to cell studies. It is unclear whether drinking tea has any effect on existing bacterial and viral infections in the body.

Additional human trials will be required to determine the role of tea in protecting or improving skin health.

These effects have yet to be investigated in human trials.

Ceylon tea and its compounds are not strong enough to prevent or treat cancer. However, many researchers have investigated whether regular tea drinking has an effect on the incidence of cancer [2, 41].

A review of 9 cohort studies (of 465,000 people) showed that green tea consumption was associated with fewer cases of liver cancer in Asian women, but not in Asian men [42].

Also, an increase in the consumption of green tea was tentatively linked with reduced lung cancer risk, according to a meta-analysis of 22 studies [43].

Green tea also had protective effects on esophageal cancer in a meta-analysis of 24 studies with 7,376 subjects [45].

Tea polyphenols are also being investigated for their potential effect on ovarian cancer and leukemia cells [50, 51].

The available data indicates a potential role for tea in cancer prevention. However, additional research is required to determine the role of tea polyphenols against cancer.

Most of the studies are based on the tea plant Camellia sinensis, but they do not mention the origin of the plant. Thus, many of the following health benefits are from tea in general, and not from a specific location. Only in the sections where Ceylon tea is specifically mentioned did the studies use tea from Sri Lanka.

Additionally, many of the studies are animal studies. More human trials are needed before extensive use of Ceylon tea for its health benefits.

Drinking moderate amounts of black tea is safe for most adults, but drinking more than 5 cups per day is unsafe. This is because of the high amounts of caffeine, which can cause mild to severe side effects. Caffeine can cause seizures, delirium, and heart rate problems [52].

If you are pregnant or breastfeeding drinking a small amount is safe, but drinking more than 2 cups a day may cause health problems. It is linked to an increase in miscarriages, sudden infant death syndrome, and lower birth weight [53, 54, 55].

Ceylon tea is rich in fluoride. Although fluoride is good for your teeth in small quantities, high amounts can cause harm. Dental fluorosis is a concern [58].

Ceylon tea is considered very safe to consume, but drinking large quantities of tea may be unsafe during pregnancy or in people with anemia, thyroid dysfunction, or any sensitivity to caffeine.

Flavonoids from tea go through the same pathways as drugs. They can potentially interfere with absorption, tissue distribution, metabolism, and excretion of drugs. They inhibit both cytochrome P450 and drug transporters [59].

Flavonoids are involved in the activity and production of CYP1A2, which is important for the metabolism of important drugs such as caffeine, theophylline, warfarin, and propranolol [60].

In a study of 237 subjects, caffeine and theophylline from tea interfered with benzodiazepine absorption in men [62].

Caffeine interactions with drugs through P450 cytochrome might change the metabolism of [52]:

Ceylon tea may affect drug absorption. Talk to your doctor about whether any of your medications might interact with Ceylon tea.

There is no officially recognized dosage of tea for any particular medical purpose because no sufficiently powerful studies have been conducted to determine one. However, several studies and reviews have found significant relationships between tea and certain health benefits, including:

Ceylon tea is a type of black, green, or white tea grown in the Ceylon region of Sri Lanka. Its polyphenols, including EGCG and theophylline, have been associated with reduced rates of heart disease, osteoporosis, obesity, and more.

Drinking Ceylon tea is considered very safe, but it may rarely interact with medications, and it contains enough caffeine and polyphenols to produce reactions if consumed in large enough quantities (several cups a day).

How Probiotics Can Benefit Gut Health