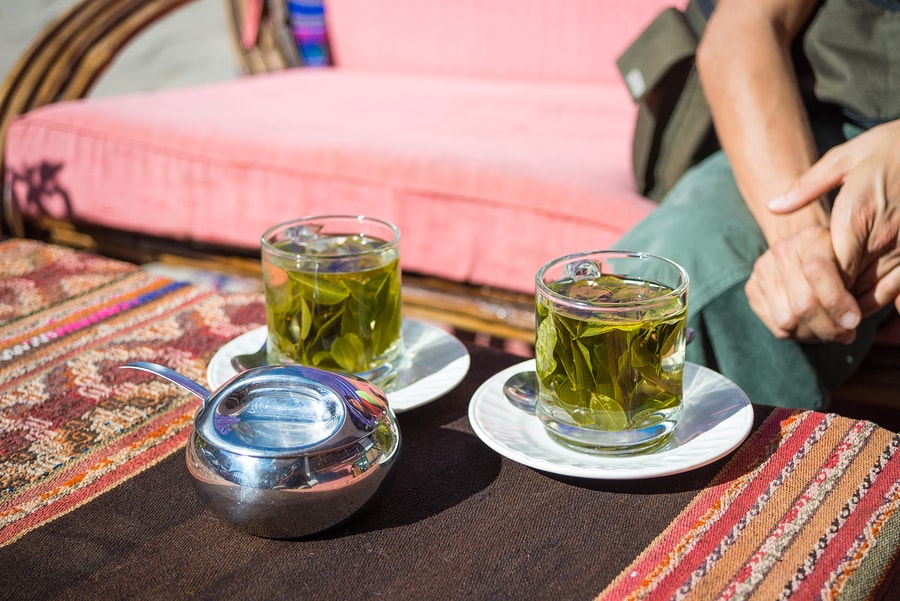 Coca leaves are derived from the Erythroxylum coca plant and although they are the source of cocaine, they should not be confused with the drug. Chewing coca leaves is a traditional habit of South Americans and a local remedy for altitude sickness, stomach pains, hunger relief, and anesthesia. Read on to find out whether these coca benefits are supported by science.

What is the Coca Plant?

NOTE: Raw coca leaves are illegal in the United States, but decocainized coca leaf tea is legal and generally recognized as safe by the FDA. We strongly recommend against the use of raw leaves.

Archaeological evidence shows that coca has been cultivated in the region for at least 3,000 years [3].

It was a sacred plant for the Incas and, according to legend, it could increase strength and vigor, while decreasing pain and suffering. Coca is still an integral part of the Andean culture today, mainly used to increase work capacity, decrease fatigue, and to alleviate thirst and hunger [3].

Undoubtedly, its most famous active compound is cocaine [4].

The potential benefits of coca are difficult to fully assess, given the lack of research and medical interest after the isolation of cocaine. To this day, science still focuses on understanding cocaine, rather than the many other active compounds found in coca [3].

However, there is some evidence that other compounds in coca leaves may be helpful with altitude sickness, decrease hunger, and ease pain [5, 4, 6].

Cocaine is the main alkaloid found in coca plants. On average, whole coca contains 0.6% cocaine in its dried leaves [3, 4, 7].

However, there are over a dozen other alkaloids, such as benzoylecgonine, ecgonine, tropacocaine, hygrine, cuscohygrine, and nicotine, that exist within this plant [3, 7].

Unaltered coca leaves and their extracts are illegal in the US and in most other Western countries [4].

The tea is legal in the US only if it is decocainized (if the cocaine is removed). We recommend strongly against using raw coca leaves.

Researchers have observed the mechanisms of coca’s action in cell and animal studies. These may or may not apply to humans, but they provide ideas for how best to study coca in humans. We have collected some of this research below.

Coca may decrease appetite by:

Coca may improve endurance/physical performance by:

Coca may improve mood because:

Coca leaf tea and supplements have not been approved by the FDA for medical use and generally lack solid clinical research. Furthermore, only decocainized coca leaf tea is legal in the United States.

Regulations set manufacturing standards for decocainized tea but don’t guarantee that it is safe or effective. Speak with your doctor before supplementing.

The following purported benefits are only supported by limited, low-quality clinical studies. There is insufficient evidence to support the use of coca leaf for any of the below-listed uses. Remember to speak with a doctor before taking coca leaf, and never use it in place of something your doctor recommends or prescribes.

Traditionally, coca leaves have been used to reduce the side effects of high altitudes, such as lack of oxygen, low body temperature, headaches, fatigue, and hunger [18, 19, 20, 3].

A 2.5-hour pilot study of 10 adults subjected to exercise at 2,700 m showed that chewing coca leaves increased glucose levels in the blood. It appears their bodies had switched from using glucose (glycolysis) to using fatty acids, which may improve physical performance at a high altitude [22].

One of the adaptations to high altitude is the increase in red blood cell levels (polycythemia) in response to the lower oxygen supply. This can cause dizziness, headache, fatigue, and hunger. The alkaloids in the coca plant, including cocaine, suppress these symptoms, which occur at high altitudes. Moreover, it seems that cocaine can actually decrease the production of blood cells [17, 23].

In a study done in the 1970s, 14 men chewed coca leaves as they were exposed to mild cold stress (15 degrees Celsius) for 2 hours. When compared to their own responses without coca, they had a more gradual decline in core temperature. This increase in heat conservation could also help against altitude sickness [24].

The coca leaves contain alkaloids, which cause a temporary lack of appetite [5].

Coca leaves also increase blood glucose levels above the fasting level, which limits the feeling of hunger. This was shown in both humans and animals [10, 11, 12, 13].

Cocaine is known to produce a feeling of fullness, which is controlled by dopamine actions in different parts of the brain (nucleus accumbens core) [27].

Coca leaves have traditionally been used as an energizer for physical activity [5].

However, studies found conflicting results, both regarding their effectiveness, and their mode of action.

A 2.5 hour-pilot study of 14 adults showed that chewing coca caused the body to switch from using glucose (glycolysis) to fat breakdown (lipolysis), which provided benefits during and after physical activity [22].

Another 1-hour pilot study showed that coca chewers during exercise had increased adrenaline levels in the blood, used more fat, and their oxygen uptake increased slower than in non-chewers. This could explain their higher endurance [10].

A 1-hour study of 21 adults showed that coca leaves increased the levels of free fatty acids, which may improve physical performance. However, there was no increase in exercise efficiency nor capacity [14].

In an experiment among 23 men, chewing coca increased heart rate, and decreased oxygen use by muscles while exercising. Although there were some improvements compared to the control group, the results were not conclusive [16].

A 1-hour study among 12 coca-chewing adults and 12 non-chewers showed that coca chewing decreased blood volume at rest, but increased the heart rate and blood pressure during exercise [15].

No clinical evidence supports the use of coca leaf for any of the conditions listed in this section. Below is a summary of the existing animal and cell-based research, which should guide further investigational efforts. However, the studies listed below should not be interpreted as supportive of any health benefit.

Traditionally, coca leaves have been used as a local anesthetic and pain reliever, to ease stomach and gut pain, and to treat toothaches and mouth sores [6, 30, 5, 31, 32].

In an animal study, cocaine, as well as other coca leaf alkaloids, caused local anesthesia in rats [33].

In fact, cocaine is sometimes used as an anesthetic for surgical procedures. It inhibits sodium channels, which decreases nerve impulse conduction and neuropathic pain [34, 35, 36, 37].

The benefits below have been brought up in literature, but there are no scientific studies about them. Because of the lack of research, we recommend against using coca for these purposes.

Chewing coca leaves may cause [20]:

In contrast to other chewing habits, such as tobacco, coca leaves do not cause DNA damage. They do, however, cause some different types of cell damage. This was shown in a study of cells obtained from 45 habitual coca leaf chewers and 23 controls [38].

Coca Paste Is Addictive and Dangerous

Coca paste is an extract of coca leaf that contains between 40% and 91% cocaine. It is highly addictive and can cause paranoia, psychosis, hallucinations, and even death [6].

There is a limited number of studies about the benefits of the coca plant and many of these are based on personal notes and historical documents, rather than clinical trials.

Furthermore, the few clinical trials were carried out with a small number of participants, and some of their findings are debatable. Most are also decades old.

Further research on the benefits and side effects of coca is needed.

6 Health Benefits of Kava + Side Effects