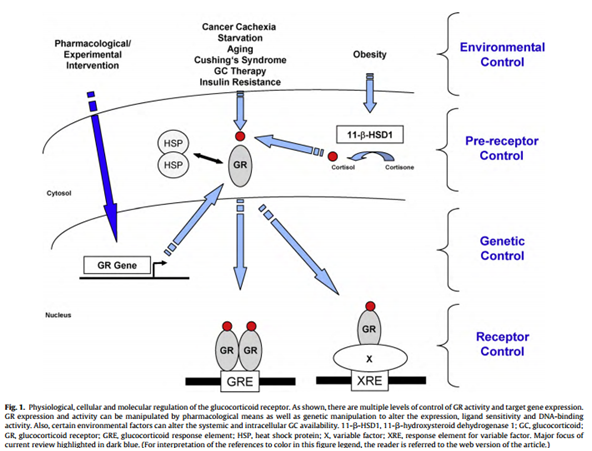 What Are Glucocorticoid Receptors? 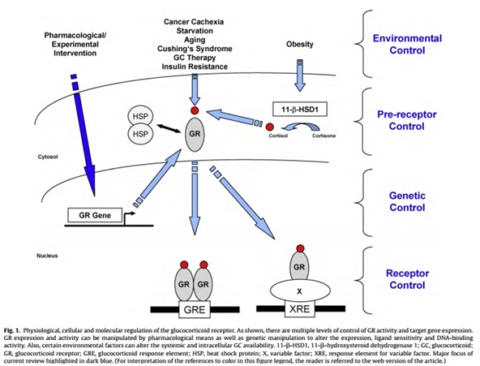 Glucocorticoids are our primary stress hormones. They belong to a class of natural steroid hormones that include cortisol and cortisone. In addition, medications such as prednisone, dexamethasone, triamcinolone, and many others that end in -one are synthetic glucocorticoids and can also activate the glucocorticoid receptors [1, 2].

Glucocorticoid receptors are present on the surfaces of our cells. When cortisol or other glucocorticoids bind to it, the receptors move into the cell nucleus to change (increase/decrease) the production of specific proteins [1, 2].

Cortisol and the other “stress hormones” are frequently blamed for all the negative effects of stress, but this isn’t the whole story. The body’s response to cortisol is dependent on the glucocorticoid receptor, a specialized receptor that senses cortisol and related hormones [2]. 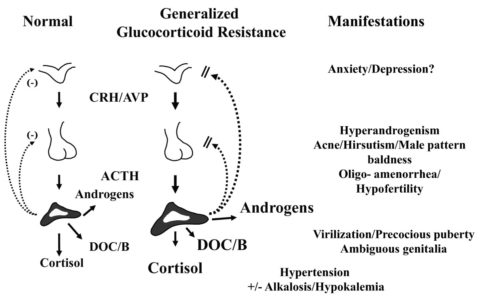 When the glucocorticoid receptor is over-activated, it becomes resistant to the effects of glucocorticoid hormones. This can cause excessive CRH and ACTH. When ACTH stimulates the adrenals, it can release other hormones like mineralocorticoids and androgens from the adrenals [4].

Chronic stress is a major cause of glucocorticoid resistance. In two studies on over 350 healthy volunteers, prolonged stress caused glucocorticoid receptor activity to fall. This interferes with the appropriate regulation of inflammation and can result in more serious health risks if it is prolonged [5].

Chronic exposure to inflammatory cytokines, as in the case of inflammatory and autoimmune disorders, inhibits glucocorticoid receptor function by activating pathways (such as NF-kB, MAPK, and COX) [8].

4) Mutations in the NR3C1 Gene

The following symptoms are commonly associated with glucocorticoid resistance but are insufficient to establish a diagnosis. Work with your doctor to determine the underlying condition causing your symptoms and to develop an appropriate plan to improve your health.

Glucocorticoid resistance symptoms are similar to symptoms of low cortisol. The body attempts to compensate them by increasing CRH and cortisol. CRH can cause excessive secretion of androgens and steroid hormones from the adrenals [4, 10].

Glucocorticoid resistance also causes the body to be more vulnerable to HPA axis dysfunction and inflammatory diseases, as well as to conditions like depression, fatigue, autoimmunity, and type 2 diabetes [10].

Additionally, the following conditions have been associated with both familial glucocorticoid resistance and cortisol resistance from chronic stress.

Glucocorticoid resistance impairs feedback inhibition of the HPA axis, leading to its dysfunction or hyperactivity [11].

Inflammation is one way in which cortisol resistance can cause fatigue. In addition, the lack of cortisol activity in the central nervous system can also contribute [4].

Depression is also strongly associated with glucocorticoid resistance in the brain, possibly because both are caused by chronic stress [12].

Increased activity of the glucocorticoid receptor in the muscles is associated with metabolic syndrome (a group of conditions that increase the risk of heart disease, stroke, and diabetes) [2].

Glucocorticoid hypersensitivity is associated with insulin resistance and high blood pressure, which are potentially serious health concerns by themselves in addition to being risk factors for type 2 diabetes [14].

Because mutations in the NR3C1 gene impair glucocorticoid receptor action and alter tissue sensitivity to glucocorticoids, they are strong risk factors for these issues [9].

Glucocorticoid resistance is also associated with infertility in men [4].

Cortisol is an anti-inflammatory hormone that can deactivate immune responses. Stress can induce immune cells, such as macrophages, to become resistant to cortisol [16].

Chronic stress can weaken the immune system and make you more susceptible to a cold. In addition, people who develop colds amidst stress have worse symptoms because their immune cells are resistant to inhibition by cortisol [5].

The following conditions have been associated with excessive glucocorticoid receptor activation. Note, however, that most studies were associational, meaning a cause-and-effect relationship hasn’t been established. Because the conditions are complex, other genetic and environmental factors could have contributed.

The stress hormones are mostly discussed for their negative effects. However, healthy glucocorticoid receptor function and signaling can reduce inflammation, improve mood, and increase energy levels. Some of the main benefits of healthy receptor activation are discussed below.

Glucocorticoids can reduce inflammation through their interactions with the glucocorticoid receptor.

When activated, the glucocorticoids receptor can increase proteins that limit inflammation. This activation can also increase the activity of the beneficial antioxidant enzyme superoxide dismutase [20].

These effects are not straightforward and can differ widely from different causes and levels of inflammation. Current evidence suggests that glucocorticoid receptor activation may not be effective in reducing inflammation in more serious immune disorders [10].

In animal brain cell cultures treated with corticosterone (the animal equivalent of cortisol), a GR/Bcl-2 complex is formed. The complex then moves into the mitochondria and helps prevent brain cell degeneration [22].

To keep these diseases and behavioral alterations from happening, properly functioning glucocorticoid receptors maintain the body at homeostasis. In other words, the feedback from the glucocorticoid hormones should help prevent depression in healthy people [24].

Indeed, reversing glucocorticoid resistance is one of the ways in which many antidepressants work [25].

Glucocorticoid receptors in T cells within the intestine play a role in controlling immune activation. Peripheral T cells also need these receptors for their immunosuppressive effects [26].

In skin cancer, glucocorticoid hormones can cause tumor growth inhibition, induction of cancer cell death, and inhibition of tumor cell motility, as seen in a cell-based study [21].

Chronic stress can cause glucocorticoid resistance. Read this post to learn about SelfHacked’s stress management strategies.

The glucocorticoid receptor and the inflammatory molecule NF-κB can inhibit each other’s activity [38, 39].

In cells isolated from asthmatic patients, exposure to allergens decreased glucocorticoid receptor sensitivity. Ragweed pollen and cat hair also caused the cells to be less sensitive to glucocorticoids (such as hydrocortisone and dexamethasone) [40].

Toxins such as aflatoxin, anthrax, and arsenic decreased glucocorticoid receptor activity in cells [41].

RNA growth arrest-specific 5 (Gas5) builds up in cells to repress glucocorticoid receptors. Its levels are mostly higher in blood cells of patients with autoimmune and infectious diseases [42].

The endocannabinoid system is a fat signaling system of the brain and body. In addition to cannabinoids produced by the body (such as anandamide), the system is activated by the cannabinoids from marijuana THC and CBD. The system has two receptors, CB1 and CB2, but most research is focused on the CB1 receptor [43]. 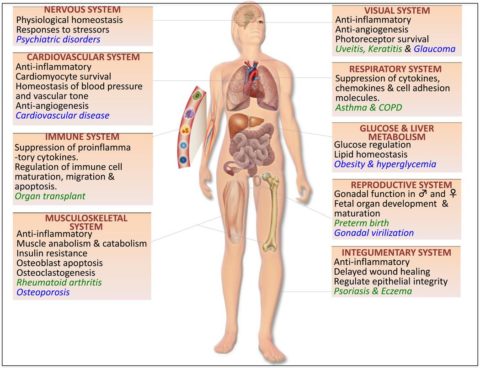 The NR3C1 (or GCR) gene encodes the glucocorticoid receptor [2].

However, since glucocorticoid receptor polymorphisms are rare, the associations between the polymorphisms and risk for certain diseases may not be significant [2].

DNA-binding proteins control the sensitivity of certain GREs. Some GREs have very low concentrations of glucocorticoids, so they are considered to be hypersensitive. On the other hand, some GREs need high doses for glucocorticoid receptor binding [47].

Glucocorticoid receptors can also bind to negative GREs, which suppresses the transcription of some genes [48].

Natural Substances
0
Vitamin D for Fitness, Cardiovascular & Metabolic Health
Neuroscience
5
1
What Is Long-Term Potentiation (LTP), And Why Is It Important?
Natural Substances
4.5
8
6 Benefits of Supplemental Boron + Signs of Deficiency