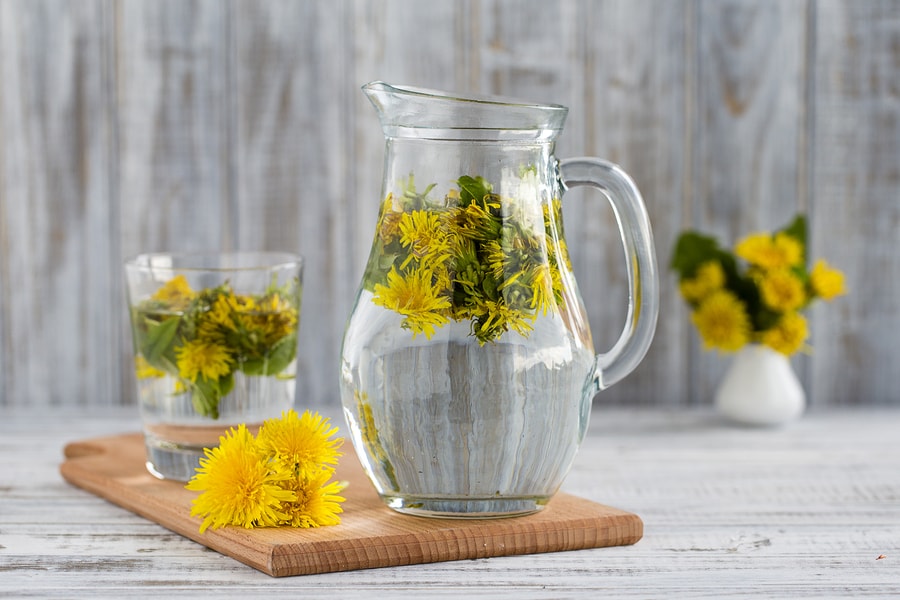 Dandelions are antioxidant greens packed with nutrients, and they can be easily added to your diet in the form of a tasty side dish, sauce, or tea. Might they have specific health benefits? Learn about the latest research here.

Dandelion (Taraxacum officinale) is known as a garden weed and belongs to a group of flowering plants (Taraxacum). The common name is derived from the French dent-de-lion, which means lion’s tooth [1].

Dandelion has been used in the traditional medicine of many cultures for centuries. In Russia, India, China, Turkey, and Mexico, dandelion was used for treating ailments such as diabetes, blisters, spleen, liver, and gallbladder issues [2, 3].

The dandelion plant is entirely edible from root and greens to flower. The majority of the beneficial properties of dandelion are common among the root, greens, and flower. Health benefits may depend on what part of the plant is used, what species, and how it is extracted [4].

Dandelion is a rich source of many vitamins and minerals such as [2]:

The health benefits of dandelion result from nutrients and antioxidants, as well as its diuretic and microbe-fighting action [6, 7, 8, 9].

In cell studies, dandelion has:

The leaves and especially the petals of dandelions contain phenolic compounds that showed antioxidant properties in human blood [21].

In mouse leukemia cells, dandelion extract acted as an antioxidant and protected the cells (via the tPI3K-AKT pathway) [12].

Dandelion supplements have not been approved by the FDA for medical use and generally lack solid clinical research. Regulations set manufacturing standards for them but don’t guarantee that they’re safe or effective. Speak with your doctor before supplementing.

The following purported benefits are only supported by limited, low-quality clinical studies. There is insufficient evidence to support the use of dandelion for any of the below-listed uses. Remember to speak with a doctor before taking dandelion supplements, and never use dandelion in place of something a doctor prescribes.

Diuretics are used to flush built-up fluids from the body. They can treat hypertension, liver, and kidney disease, and are sometimes added to weight loss protocols [23].

Dandelion has been used as a diuretic for centuries. In France, it is commonly referred to as pissenlit which roughly translates to “wet the bed.”

A pilot trial of 17 participants found that dandelion extract increased the frequency and volume of urination for up to 5 hours [9].

There are numerous anecdotal reports and traditional uses of dandelion for improving digestion, but these have not been confirmed in high-quality clinical studies [24].

Dandelion extract sped up stomach emptying in mice and rats. This allows for food to move more smoothly from the stomach to the small intestine [25].

No clinical evidence supports the use of dandelion for any of the conditions listed in this section. Below is a summary of the existing animal and cell-based research, which should guide further investigational efforts. However, the studies listed below should not be interpreted as supportive of any health benefit.

Dandelion protects against damage in several mouse models of lung injury by reducing the production of important inflammatory markers (such as TNF-a and IL-6) and blocking inflammatory pathways (Akt/PI3K/mTOR) [11, 27, 10, 28, 29].

NF-kB is one of the most important factors driving inflammation in the body. Dandelion extract protected cell lines by decreasing inflammation. Specifically, complex sugars (polysaccharides) in dandelion reduced inflammation in mouse cells by blocking NF-kB [13, 12, 14].

The dandelion extract can also reduce inflammation by blocking the production of TNF-a in mouse cells [11].

One of the most popular reasons for consuming dandelion is its protective effect on the liver. The anti-inflammatory and antioxidant properties of dandelion leaf extract protected against numerous models of liver damage in mice and rats [31, 32, 33, 34, 35].

When pregnant rats exposed to toxic lead consumed a diet rich in dandelion, it protected the liver of their newborn pups [36].

However, 2 studies in mice and rats found no benefits for diabetes, possibly due to different dandelion extracts used [39, 40].

There are several molecules found in dandelion, such as sesquiterpene lactones, taraxasterol, taraxerol, and chlorogenic acid, which could potentially be used for the treatment of type 2 diabetes. In fact, dandelion acts similarly to standard anti-diabetic drugs in a test tube (blocking alpha-glucosidase) [2, 42].

Dandelion extract killed a broad spectrum of bacteria in cell studies (both gram-positive and gram-negative bacteria) [7, 43, 44].

Dandelion may fight viruses. In cell studies, dandelion extract stopped infection and growth of influenza and the HIV-1 virus [45, 46].

Melanin is one of the major determining factors of skin color and is produced in response to UV light exposure. Dandelion blocked melanin production in mouse cells, which could be beneficial for decreasing freckles and sunspots [52].

Additionally, treating immune cells with dandelion increased immune-boosting proteins (TNF-a, IL-10, and IL-12P70), which could be related to energy levels [53].

Common dandelion protected the kidneys in rats with kidney damage [54].

The Korean dandelion protected the stomach and prevented ulcers in rats with gastritis. It reduced damage (oxidative stress), inflammation, and acid production [55].

People with anemia have low levels of red blood cells in the body, often caused by lack of iron. Not only is dandelion a rich source of iron, but dandelion extract increased red blood cell count as well as hemoglobin levels in mice [56].

One study in mice found that dandelion extract acted as an antidepressant by decreasing hormones that act on the brain and contribute to low mood (decreased corticosterone and CRF) [57].

Mastitis is one of the most dreaded complications of breastfeeding for new mothers. It involves flu-like symptoms and hot, painful lumps in the breast tissue. The oral dandelion extract had a protective effect in a mouse model of mastitis by reducing secretion of TNF-alpha [11].

Dandelion extract stopped the activity of cells that cause bone disease in a study on mouse bone marrow cells [58].

Many people report using dandelion tea for weight loss, but there is little scientific evidence to back this claim. Weight loss claims likely stem from diuretic effects, which results from temporarily reducing body fluids [9].

A small protein was isolated from Taraxacum platycarpum that blocks thrombin. Thrombin is responsible for blood clotting and is a common target for anticoagulant drugs [59].

Although numerous studies have been published on the health benefits of dandelion, most are performed in cell lines and require expansion to animal and human studies in order to confirm those findings. The studies performed in human subjects are quite limited and have a small sample size.

Dandelion is considered safe to eat as food.

Its extract had minimal side effects in studies on rabbits, mice, and rats, and it did not cause damage to healthy cells in human cell studies [64, 62].

However, allergies are possible. A study of 235 adults with various skin conditions tested for an allergy to dandelion found that 1.3% had a skin reaction [65].

There is a documented case of low blood sugar in a 58-year-old woman with type 2 diabetes [66].

Contrary to traditional use, dandelion decreased fertility in male rats, when given orally for 2 months [67].

The safety of long-term use has not been established, and it is not recommended to ingest amounts greater than those found in food. Women who are pregnant or breastfeeding and children should be especially cautious [5].

When in doubt, talk to your doctor before using dandelion.

Dandelion can be eaten as food or taken as a supplement.

There are many simple ways to include dandelion in your diet, like consuming dandelion greens. Microwaving or steaming dandelion can increase total antioxidant activity by nearly 61% [71].

There is no safe and effective dose of dandelion because no sufficiently powered study has been conducted to find one. That being said, clinical trials have found benefits associated with certain doses, including [5]:

Dandelion in Combination with Other Supplements

A human study treated 24 patients with chronic gut inflammation (colitis) with dandelion in combination with other herbal supplements. Afterward, 95% of patients reported that pain had disappeared after 15 days of treatment, and the majority of issues with bowel movements were resolved [72].

An additional study (prospective cohort) using a combination of artichoke leaf, dandelion radix, turmeric rhizome, and rosemary essential oil-treated 311 human patients with indigestion (functional dyspepsia) and found that 38% of patients had a 50% reduction in all symptoms within 30 days [24].

What is Dong Quai Root (Angelica sinensis)? + Side Effects