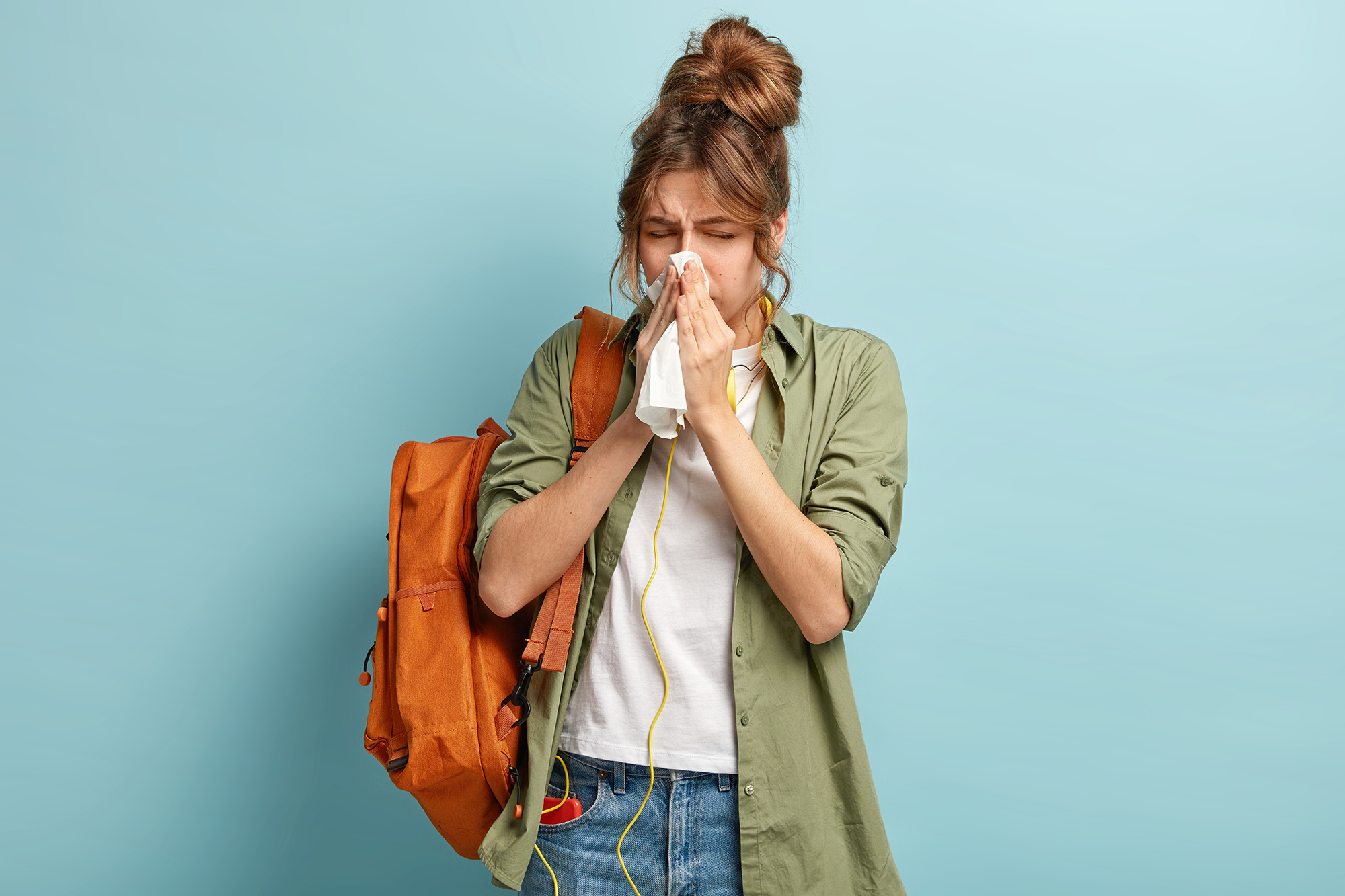 Leukotrienes activate the immune system after infection, injury, or contact with allergens. Read on to learn about natural and pharmaceutical options to block them and the genetics that may change the way your body produces and reacts to them.

Leukotrienes are chemical messengers that powerfully activate the immune response. These molecules are formed from the breakdown of arachidonic acid (AA), a fatty acid component of cell membranes that acts as a precursor for a variety of inflammatory chemicals.

Depending on the enzymes present in the cell, LTA4 is then converted into two main types of leukotrienes:

Leukotrienes are chemical messengers that activate the immune response. They are formed when arachidonic acid is converted into either leukotriene B4 or cysteinyl leukotriene.

How to Lower Leukotriene Levels

The most useful strategy to decrease leukotriene production is to reduce the activity of:

The main disadvantage of 5-LOX and FLAP inhibitors is the impaired production of anti-inflammatory compounds (lipoxins and resolvins) [5].

In this respect, blocking LTA4H and LTC4S is preferable.

The first LTA4H inhibitors were:

LTC4S inhibitors are rare and inefficient, as is the case for:

Some drugs reduce inflammation and immune activity by blocking the production of leukotrienes. These include LTA4H inhibitors and LTC4S inhibitors. We strongly recommend against taking any of these drugs without a doctor’s prescription.

Leukotriene receptor antagonists (also known as leukotriene modifiers) are drugs that block the action of leukotrienes by preventing their binding to their receptors. The main leukotriene B4 antagonists tested in clinical trials are:

The most widely used leukotriene receptor blockers are those preventing cysteinyl leukotrienes from binding to their receptor CysLT1. The main commercial drugs in this category are montelukast, zafirlukast, and pranlukast.

Some drugs reduce inflammation and block the immune response by directly inhibiting the binding of leukotrienes to their receptors. We strongly recommend against using any of these drugs without a doctor’s prescription.

Some natural substances have been found to reduce leukotriene production in animals and cells. However, whether they may help with inflammatory conditions triggered by these molecules in humans remains unknown. If you want to use these compounds as a supportive measure, talk to your doctor to avoid any unexpected interactions.

These plant compounds (alkaloids) blocked the formation of leukotrienes and prostaglandins in cell-based studies:

Boswellia (frankincense) blocks leukotriene production. Therefore, it can reduce and prevent inflammation in many chronic inflammatory diseases like asthma [45].

Caffeic acid phenyl ester (CAPE), the active component of honeybee propolis extract, blocks 5-LOX activity and the release of arachidonic acid. In rats, it reduced the production of leukotrienes after stroke [47, 48].

In a cell-based study, capsaicin (found in peppers) and curcumin reduced the conversion of arachidonic into leukotrienes B4 (capsaicin by 46%; curcumin by 61%) and C4 (capsaicin, 48%; curcumin, 34%) in rat macrophages [49].

A component of fruits from the citrus family (Rutaceae), goshuyuamide II, inhibits leukotriene B4 production by inhibiting 5-LOX [55].

Ginger blocks the production of prostaglandins and leukotrienes [58].

Huang-Lian-Jie-Du-Tang (HLJDT), a traditional Chinese prescription with anti-inflammatory properties, contains the extracts of:

In rats, lycopene (found in tomatoes, guava, watermelon, sweet red peppers, grapefruit asparagus, and purple cabbage among others) blocked the production of 5-LOX in macrophages found in the thin layer of tissue that lines the stomach and the prostate [64].

This fatty acid, together with ursolic acid, contributes to the anti-inflammatory activity of the medicinal plant Helichrysum picardii in part by inhibiting 5-LOX [67].

Pygeum africanum extract inhibits the byproducts of the 5-LOX enzyme [68].

Quercetin (found in capers, red onion, radicchio, kale, buckwheat, dill, and cilantro among others) reduces the release of histamine, leukotrienes, and prostaglandins [69].

Other compounds acting as potent inhibitors of 5-LOX include:

Resveratrol (found in the skin of grapes, blueberries, raspberries, and mulberries) acts as a competitive inhibitor of 5-LOX [71].

Some natural compounds may block either the production of leukotrienes or their binding to their receptors. These include active compounds from plants such as aloe, butterbur, black cumin, and boswellia, as well as the well known antioxidant resveratrol.

Genetic variants in FLAP (the activating protein of 5-LOX, the enzyme that initiates the lipoxygenase pathway) (rs17222814) and LTA4H (an enzyme that makes leukotriene B4) (rs2247570) are linked to an increased risk of heart attack [74, 75].

Genetic variants that affect the production of the enzyme that initiates leukotriene synthesis (5-LOX) also increase the risk of artery hardening. This effect can be promoted by dietary omega-6 fatty acids and inhibited by omega-3 fatty acids [76].

Certain genetic variants have been associated with increased leukotriene activity. These include mutations in FLAP, 5-LOX, and LTA4H.

In the cyclooxygenase pathway, cyclooxygenases (COX1 and COX2) and other enzymes convert arachidonic acid into different types of prostaglandins [78, 79, 80]. 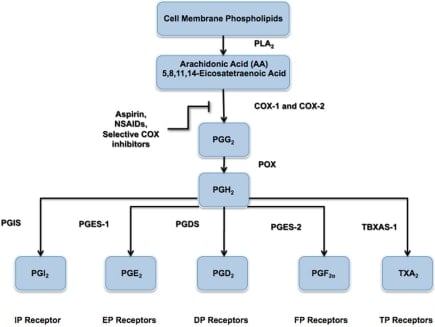 Prostaglandin D2 (PGD2) is produced following exposure to allergens. Its main functions include:

Arachidonic acid can be made into leukotrienes, prostaglandins, or thromboxane A2.

Interaction between Leukotrienes and Prostaglandins

Leukotrienes can interact with prostaglandins in many ways during inflammation or injury. They can either block each other’s production and effects or enhance them.

Leukotriene E4 enhances the effects of prostaglandin D2 in activating cytokine production by a type of white blood cells (ILC2s) in people with asthma [115].

Leukotrienes interact with prostaglandins in a number of ways. They can either block each other’s effects or enhance them during inflammation or injury.

Some natural compounds may block either the production of leukotrienes or their binding to their receptors. These include active compounds from plants such as aloe, butterbur, black cumin, and boswellia, as well as the well known antioxidant resveratrol.

Certain genetic variants may also change the way each individual person produces and reacts to leukotrienes. In addition, because arachidonic acid can be used to make leukotrienes or prostaglandins, these two families of compounds have complex interactions with one another.

What Are Fatty Acids?