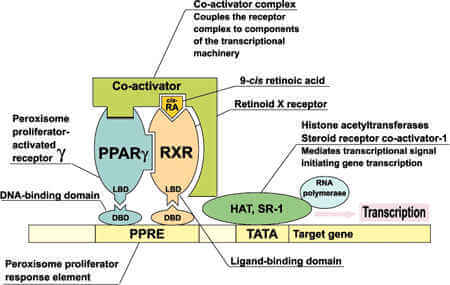 Could low vitamin A or low RXR activation contribute to your health problems? Read this post to learn more.

What Is a Retinoid X Receptor?

The retinoid X receptor (RXR) is a vitamin A receptor that often partners with other important receptors inside the cells. As a result, it has several important roles in energy production, immune responses, development and skin health.

Each RXR subtype is encoded by different genes and interacts with different biological pathways when activated [1].

Retinoid X Receptors (RXRs) are vital for the control of genes that are involved in the immune response [5].

Th1 and Th2 cell production influences the adaptive immune response. Th1 cells are mostly responsible for protecting against pathogens inside the cells. Meanwhile, Th2 cells protect against parasites that are located outside the cell [6].

In a study of mice, scientists found that the RXR-α transmission pathway is necessary for Th2 responses. RXR-α deficiency decreases Th2 cell formation and causes Th1 cell levels to be too high [6].

This RXR activation in CD4+ T cells (cells that could become either Th17 or Tregs) significantly ameliorated disease severity in mouse models of multiple sclerosis [7].

RXRs increase cAMP production in human skin tissue. This increases the level of immune cells in the skin and increases antimicrobial strength [9].

Leaky gut is a condition where the tight junctions between the cells that line the gut have increased permeability. This means the gut content is exposed to the immune system, potentially causing inflammation [10].

Activation of pathways involving the retinoid x receptors promotes the development of a healthy intestinal barrier, which reduces the risk of a leaky gut [11].

Retinoid X receptors (RXRs) are important for the control of genes that are involved in the immune response to inflammation [5].

In an animal model, mice that lack RXR-α in their myeloid cells had reduced CCL6 and CCL9 (proteins that attract, activate, and induce growth of immune cells) levels. This is evidence that RXR-α is needed for the transcription of these cytokines that respond to inflammation. The lack of RXR-α activation may prevent necessary inflammatory responses in the presence of injuries or infections [5].

RXRs are potential targets for immunotherapy during chronic inflammatory diseases [5].

In cell studies, RXR-α interacts with other receptors to promote immune transmission that prevents the production of human breast cancer cells [14].

When scientists increased RXR-α in breast cancer cells, the cancer cells became more sensitive to RXR activators. This sensitivity made it easier for the activators to stop the cell growth cycle and stop cell production [14].

The retinoid X receptors are involved in metabolic transmission pathways that reduce the risk of obesity when properly activated [2].

Laboratory animals without RXR-α in their livers eat less but weigh more compared to healthy animals [2].

RXR-α is found in the liver where it maintains healthy fat metabolism [16].

In one study of diabetic rats, administration RXR activators increased their energy production [2].

On the other hand, the deletion of RXR-α in mice fat cells made them resistant to obesity induced by high-fat diet or chemicals [2].

Laboratory animals without RXR-α in their livers have higher cholesterol levels and are prone to fatty liver disease [16].

Both of these defects are key risk factors for obesity [16].

New therapies that improve insulin sensitivity include molecules that partner with RXR as part of a complex with other receptors. These partners then increase the function of genes involved in insulin action, fat cell production, fat energy production, and inflammation [17].

Retinoid X Receptors are partly responsible for skin vitality and health. In skin cells, RXRs work with the vitamin D receptors to allow for vitamin D synthesis from the sun [21].

These receptors play a crucial part in decreasing the symptoms of chronic hand eczema through increasing vitamin A binding affinity [22].

Healthy retinoic X function in pregnant women promotes proper absorption of vitamin D. This allows normal immune cell production in the placenta and prevents the development of allergies or asthma in newborns [23].

In most cases, these animals also fail to thrive during early development [1].

Laboratory animals without the RXR-β and RXR-γ genes have metabolic and behavioral defects [2].

RXRs and RARs are important for neuronal and synaptic plasticity in the hippocampus [26].

However, in mice, excessive levels of vitamin A also result in cognitive deficits and reduced cell growth in the hippocampus [27].

RXRs and RARs are important for the cellular production of [28]:

Neurotransmitters and Their Receptors

Enzymes that are involved in the production, conversion, or breakdowns of neurotransmitters:

RXRs partner with RARs to control gene production in response to vitamin A [2, 24].

RXRs bind to and work with vitamin D receptors (VDR] [1].

RXRγ and VDR also work together to guarantee the proper functioning of nerve cells [38].

RXR partners with both liver X receptor-α and LXR-β.

RXRs partners with peroxisome-proliferator-activated receptors (PPARs). These partnerships allow the cell to sense and respond to fatty acid molecules. This helps with fat energy production [1].

The RXR and PPARα complex may potentially treat high cholesterol [1].

Mice without the RXR-α gene often have defects in the PPARd and PPARγ transmission pathways. This causes mice to die in the early embryonic stages [41].

RXRs form heterodimers with the farnesoid X receptor (FXR). FXR acts as the sensor for bile acids. FXR increases cellular production from genes involved in the energy production of cholesterol and bile acids [1].

Mice without the FXR gene have high cholesterol and bile acids in their blood [1].

The pregnane X receptor (PXR, or SXR) is another binding partner for RXR. PXR increases the production of detoxifying enzymes. In the liver, small intestine, and colon, PXR helps detoxify and clear foreign toxic substances and drugs from the body [1].

RXR also binds with the constitutive androstane receptor (CAR). CAR is another receptor that helps detoxify and protect against harmful molecules [1].

Both PXR and CAR are responsible for the transportation of substances (drugs and steroids) out of the body [1].

Null mutations cause a certain gene to not be found. Mice without the RXR-α gene may have many growth and development defects, including the following:

SNPs inside of RXR-alpha that have been implicated in increased cancer risks include [46, 47]:

Schizophrenia is a disorder that causes visual and auditory hallucinations, along with other symptoms. There has been increasing evidence that retinoid dysregulation is a factor in schizophrenia development [28].

Retinoid toxicity and deficiency cause symptoms similar to those caused by schizophrenia [28].

The RAR/RXR complex controls various schizophrenia candidate genes. They include dopamine and dopamine receptors, serotonin, glutamate receptors, and many others [28].

All of this evidence supports the theory that RXR and RAR play important parts in preventing schizophrenia. Without these receptors, the brain does not function normally. Dysregulation of retinoic acid helps cause schizophrenia [28].

Retinol and alcohol metabolism overlap with each other. Vitamin A deficiency and alcohol toxicity cause similar abnormalities during fetus development [49].

Mice without both the retinoic acid receptor and retinoid X receptor (RAR-RXR) in the liver are more susceptible to alcoholic liver disease [49].

The ADH protein converts ethanol to acetaldehyde, which accounts for most of the toxic effects of alcohol. The level of ADH1 expression influences the risk for alcohol-induced liver injury [49].

In mice, RXR-α deficiency increased ADH activity, which enhanced alcohol and acetaldehyde clearance in the blood and liver. This results in more serious liver injuries [49].

Also, mutations in RXRs along with the NR4A2 gene increase alcohol dependence in humans, causing alcoholism [50].

Deficiency in the production of RXR-α caused a reduction of S-adenosylmethionine (SAMe) and glutathione (GSH) levels, both of which are important for alcohol detoxification. It also resulted in a more serious alcohol-induced liver injury [49].

In one study, scientists bred a group of mice that did not have RXR-β gene activity. Around 50% of mice without the gene died before or during birth [51].

Additionally, the surviving male mice had abnormal sperm formation. This caused all of them to be sterile and unable to reproduce [51].

Side Effects of RXR Activators (Agonists)

Synthetic RXR activators (agonists) have side effects, such as cholesterol elevation and hypothyroidism [52].