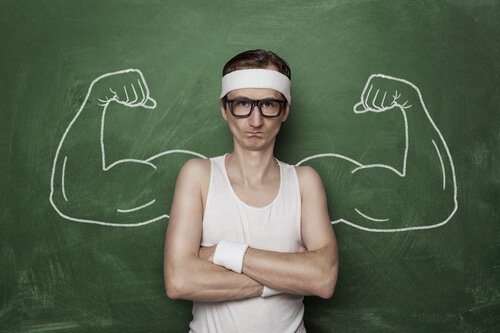 Due to its widespread distribution and movement in the body including the brain, icariin exhibits several potential biological activities such as antioxidant and anti-inflammatory effects, neuroprotection, anti-tumor activity, as well as promoting overall health in the heart, bones, and a variety of other organs [2, 3].

Icariin increased hip and lower spine bone density in a clinical trial on 100 postmenopausal women by inhibiting a bone breakdown-marker (deoxypyridinoline) and maintaining a bone-formation one (osteocalcin) [4].

Icariin may also promote the production and activity of bone cells (osteoblast) based on the results of cell-based studies [8, 9, 10].

Icariin inhibited the formation and bone-resorbing action of osteoclasts by increasing OPG/RANKL ratios in bone cells [13].

Osteoprotegerin (OPG) is known to inhibit RANKL activity, which plays a role in osteoclast formation and bone destruction [14].

In addition, icariin may suppress osteoclast formation by decreasing superoxides, reactive oxygen species that are required for osteoclast survival and activity [12].

Although promising, the evidence to back the use of icariin supplementation to promote bone repair is based on a single clinical trial and a few animal and cell-based studies. Larger, more robust clinical trials are required.

In a small trial on 10 people with bipolar disorders and alcohol abuse, icariin (up to 300 mg/day) reduced depressive symptoms and alcohol consumption [16].

The HPA (hypothalamic-pituitary-adrenal) axis plays a role in mitigating physiological responses to stress, with hyperactivity implicated in depressive and anxiety disorders [17].

Thus, icariin may act as an antidepressant by decreasing HPA axis hyperactivity through inhibition of CRF and cytokine levels in depressive patients [17].

In a clinical trial on 80 men with a lifelong history of premature ejaculation, PDE5 inhibitors delayed ejaculation from vibratory stimulation. This preliminary finding should be confirmed in additional clinical studies on larger populations [20].

No clinical evidence supports the use of icariin for any of the conditions listed in this section. Below is a summary of the existing animal and cell-based research, which should guide further investigational efforts. However, the studies listed should not be interpreted as supportive of any health benefits.

This is due to increased cGMP and nitric oxide levels which lead to smooth muscle relaxation, widening of blood vessels and increased blood flow to the penis, facilitating erection [1].

Research indicates that high levels of testosterone are correlated with increased sexual desire in aging males and females, suggesting that icariin may act as a natural aphrodisiac in individuals with diminished libido [24, 25].

Beta-amyloid peptides (Aβ) are proteins that cause plaque formation and cell damage in Alzheimer’s disease [29].

This is likely due to activation of the PI3K/Akt pathway, which plays a critical role in cell survival [31].

Icariin improved dementia in aluminum-intoxicated rats by reducing oxidative damage and β-amyloid deposits in the hippocampus. This is in part due to increased superoxide dismutase (SOD), an enzyme that reduces oxidative damage [32].

In rats with brain inflammation, short-term icariin treatment improved spatial learning and memory abilities. This effect is thought to be due to the lowering of pro-inflammatory cytokines (TNF-alpha and IL-B), as well as COX-2, an enzyme responsible for fever, inflammation, and pain [33].

Icariin may also suppress neuroinflammation by inhibiting the activation of microglia, macrophage-like cells in the brain nervous system that play a pivotal role in initiating the neuroinflammatory response [35].

The anti-inflammatory effect of icariin may be attributed to its inhibition of the NF-κB and p38 MAPK pathways, which are involved in microglia and proinflammatory marker activation [35].

BDNF is a neurotrophic factor involved in cognition, synaptic plasticity, and neuronal survival [36, 37].

In rats recovering from a stroke, icariin protected against cognitive deficits by increasing acetylcholine metabolism in the hippocampus, a key neurotransmitter involved in learning and memory [38].

In addition, icariin may enhance cognitive function via stimulation of the NO/cGMP pathway. Elevated levels of cGMP and nitric oxide (via icariin inhibition of PDE5) improved brain blood flow, synaptic plasticity, neurovascular dysfunction, and β-amyloid elimination from the hippocampus (memory center) and cortex [39, 40].

Due to its potent anti-inflammatory, antioxidative and anti-amyloid activity in the brain, icariin may serve as a promising therapeutic option for cognitive disorders such as Alzheimer’s disease and other forms of dementia [41, 42].

Mitochondria are known to play a key role in increasing energy production for brain cell survival during a stroke [48].

SIRT1 activates the PGC-1alpha pathway, which is known to promote mitochondrial biogenesis and energy metabolism [48].

Also, SIRT1 can reduce oxidative stress, a key factor involved in protein and DNA damage in the cell [44].

It improved heart function and reduced tissue death in rats with an acute heart attack by activating the PI3K-Akt pathway, which plays a critical role in cell survival [52].

Icariin also improved heart function by reducing oxidative damage in the mitochondria of diabetic rat hearts. Icariin may improve blood flow to the heart by widening heart vessels via inhibition of Ca2+ channels, which helps reduce the risk of heart stroke and tissue death [54, 56].

Artery hardening (atherosclerosis) is a common cause of stroke and heart attack. Icariin may reduce the risk of hardening of the arteries by lowering cholesterol levels in the blood, as seen in a study in rabbits [57].

Icariin reduced intestinal inflammation and improved disease symptoms in mice with irritable bowel syndrome (by inhibition of STAT1 and STAT3 phosphorylation which is responsible for activating and increasing Th1 and Th17 T-cells and pro-inflammatory cytokines) [61].

Furthermore, it improved airway inflammation in asthmatic rats (by adjusting the Th1/Th2 cytokine imbalance in the lung tissue). Icariin also inhibited the activation of the NF-κB pathway in lung tissue, which is involved in inflammation [62].

Another study showed that icariin decreased lung inflammation (by inhibiting pro-inflammatory markers TNF-α, IL-6, COX-2 and iNOS in the lung via activation of the PI3K/Akt pathway and inhibition of NF-κB) [63].

Multiple sclerosis (MS) is an autoimmune disease in which T-cells attack them in the brain nervous system (CNS), causing axon damage and disability. Icariin improved disease symptoms in mice with induced MS (by suppressing the production of T cells and Th1 and Th17 cells) [64].

Icariin increased the production of toll-like receptor 9 (TLR9) in mouse macrophages. TLR9 is a protein that functions in pathogen recognition and activation of the innate immune response [65].

Icariin reduced physical fatigue and increased endurance in mice during a weight loaded swimming test. In this study, icariin increased blood glucose, hemoglobin and glycogen levels, all of which are known to improve speed, endurance, and exercise ability.

PDE5 inhibitors enhanced circadian responses to light and decreased the amount of time necessary for re-entrainment in mice [67].

Icariin and PDE5 inhibitors may help you advance your rhythm. See my interview with the author of this study.

Icariin also delayed aging in mice by increasing SIRT6. This enzyme promotes DNA repair and energy metabolism and inhibits the NF-kB pathway, which is involved in cellular aging, death, and inflammation [69].

Note, however, that this result hasn’t been validated in humans or even in animals. Clinical research is needed to confirm this preliminary finding.

In stomach cancer cells, icariin suppressed tumor cell movement and invasion by inhibiting the Rac1-dependent VASP pathway, which is involved in cellular motility [75].

In another study, icariin suppressed the attachment and movement of stomach cancer cells by inactivation of protein kinase A (PKA), an enzyme known to promote cell production and survival [76].

Note, however, that many substances have anti-cancer effects in cells, including downright toxic chemicals like bleach. This doesn’t mean that they have any medical value. On the contrary, most substances (natural or synthetic) that are researched in cancer cells fail to pass further animal studies or clinical trials due to a lack of safety or efficacy.

Keep in mind that icariin is a relatively unresearched substance and its purported benefits are supported by either limited, low-quality clinical studies or only animal and cell-based studies. Remember to speak with a doctor before taking icariin supplements. Icariin should never be used as a replacement for approved medical therapies.

Many icariin supplements are available. Be sure to buy from a reputable manufacturer that states the icariin content on the label.

If that’s what you’re looking for, check out our post about Surprising Natural Aphrodisiacs to Increase Libido.

Other brands sell icariin with Yohimbine for fat reduction.

6 Potential Benefits of Higenamine + Side Effects